Hay on Wye - More Than Just a (Great) Festival! 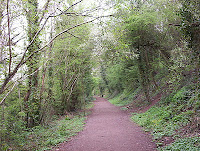 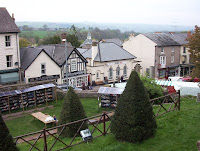 With the annual Hay Festival starting tomorrow, it seemed timely to talk about this little town (which is normally home to only 1500 inhabitants).
Nestling on the English/Welsh border, I remember this formerly sleepy little market town in my extreme youth when my parents and I would come down to nearby Hereford to stay with my grandparents.
This was before a gentleman by the name of Richard Booth decided to move there, buy a bookshop and create the world’s first Book Town – despite being told that, “No-one reads books in Hay on Wye”.
The rest, as we know, is history. By a mixture of forceful personality, and a penchant for the outrageous, he proceeded to wake up the sleepy little town, put it firmly on the map and, in so doing, became something of a legend in his own lifetime.
Declaring independence from Great Britain and crowning himself King of Hay, he ensured maximum news coverage and the success of his project. In the course of his exploits, he bought the dilapidated 13th Century castle but, sadly, he has now decided to sell it and if you have £2million to spare, it could be yours. Mind you, he’s not leaving it entirely. It is reported that there is a stipulation that a portion of the land be kept spare for the erection of a statue of the man himself!
But Hay is much more than just a Mecca for book lovers and an amazing Festival. It lies in enchanting countryside and the picturesque River Wye winds its way through it. There are a number of charming pubs and excellent food and everyone I have met there has been friendly and welcoming. My husband and I always stay at The Start Inn and I would thoroughly recommend it.

Hereford is well worth a visit and there is a whole trail of ‘Black and White’ villages to explore.  You will see the famous Hereford ‘White Face’ cattle in nearby fields and you are also in the heart of cider country, so expect to see acres of apple orchards with many traditional varieties, and the largest traditional cidermaker in the country just a few miles beyond Hereford, in Much Marcle (Westons).
The Festival runs from May 26th-June 5th 2011 and among the headline guests will be Nobel Laureates VS Naipaul, JMG le Clezio, Paul Nurse and Mohammed ElBaradei, historians Eric Hobsbawm, Michael Wood, Bettany Hughes and Niall Ferguson, broadcasters Chris Evans, Jenni Murray, Kevin McCloud and Evan Davis, actors Vanessa Redgrave, Ralph Fiennes, Rob Lowe, Gillian Anderson and Simon Russell Beale, and writers Paul Theroux, Linda Grant, Malorie Blackman, Michael Morpurgo and Jacqueline Wilson.
Some links for you to view:
For information about Hay Festival:
http://www.hayfestival.com/portal/index.aspx?skinid=1&localesetting=en-GB
On the town itself: http://hay-on-wye.co.uk/
Also: http://the-start.net/
http://www.westons-cider.co.uk/
Posted by Catherine Cavendish at 19:20