...well mainly anyway!
The chain of Orkney Islands lies off the northern coast of Scotland - much closer to Norway than London - and with a life, vibrancy and magic all of their own. Many are uninhabited, one even boasts a herd of formerly domestic cattle, who now own the land that was once farmed by the human inhabitants who brought them there generations ago. 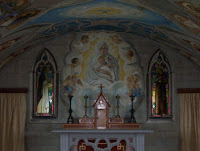 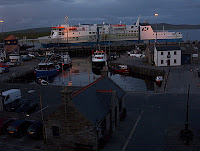 Orkney is more Viking than Scottish. Even the accent has a distinctive quality which separates it from its neighbours. In fact, the largest island is known as Orkney Mainland which also seems to me to serve as a reminder to the rest of Britain that this is a world apart from the rest of the UK and intends to stay that way.
Many artists and writers come to visit and then to live in the islands and who can blame them? The amazing, almost mystical light that shimmers on misty days, the seemingly endless twilight of summer and the folklore and legends that abound and stories retold around the blazing fires of the long, dark winters: all are addictive. Ask an Orcadian to tell you the Orkney Creation story - 'Assipattle and the Stoor Worm' while you sip a warming nip of the local Highland Park Single Malt. 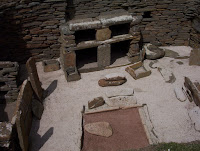 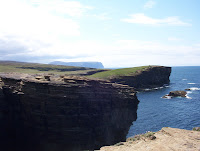 (The photos above show (Top): The interior of the Italian Chapel, built by Word War II Italian Prisoners of War and given by them to the islanders and Stromness harbour. (Below): Yesnaby and Skara Brae Neolithic Village)
Where are your magical places?
Posted by Catherine Cavendish at 14:36