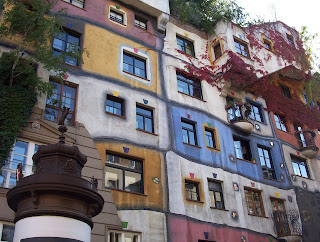 Who Lives in An Apartment House Like This?
Around 200 council tenants – that’s who!
When you visit Vienna, the dilemma is always not what to see, but what you can afford to miss in the limited time at your disposal. But if you are an art lover, a writer, or possess imagination or creativity, you can’t miss this incredible building.
Hundertwasserhaus started off its life in 1977 as an invitation from the then Mayor of Vienna to its most prominent living artist – Friedensreich Hundertwasser – to design and build a council-owned apartment house.

The artist himself is a fascinating subject. Born Friedensreich Stowasser in Vienna in 1928 (he changed his name in 1949), he made his name as an artist,creating vivid spirals and animated paintings influenced by Klimt, Schiele and Klee. Influenced he may have been, but his style – and his ideas were radical and they were his own. 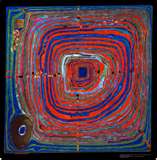 He loved the irregular patterns and shapes of nature and found straight lines abhorrent. This led to arguments with the state appointed architect whose original designs were for a building built on a regular grid-like pattern. The project stalled for some time until eventually a way forward was found and this amazing, irregular, forested building was erected in one year. As you stare up at it, you are looking at 52 apartments and 4 offices, but you are also looking at around 250 trees and bushes. Can we call Hundertwasser the first modern ecologist? Probably not, but he was certainly one of them!
As a visitor, you are struck by the unevenness of everything, both inside and outside the building and its little array of souvenir shops. The walkway undulates, every window is different, the colours demand your attention. You may love or hate Hundertwasserhaus but you will never ignore it. Or forget it.
Getting there: It is within walking distance from the Wien Mitte train station and Landstraße Underground station which is served by lines U3 and U4 and is located in Vienna's Landstraße district at the corner of Kegelgasse and Löwengasse.
While you are there, visit the Kunst Haus Wien – the museum dedicated to Hundertwasser where you will see many of his amazing spirals and designs for ecologically friendly living. It is situated just a short walk away. There is also a lovely café where, in autumn, you can get the most delicious cream of pumpkin soup. You’ll find Kunst Haus Wien at Weißgerberlände 14, and you won’t miss it. By now, Hundertwasser’s distinctive style will tell you that you’re in the right place.
Posted by Catherine Cavendish at 12:54