The Derelict – but not quite deserted - North Wales Hospital, Denbigh 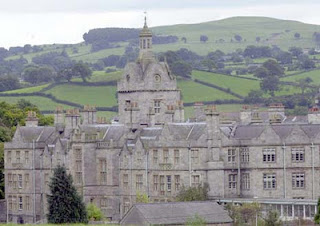 A few weeks ago, I was asked in an interview, whether living in Wales, with its wealth of legends, myths and mysterious places, gave me ideas for my stories.
Let’s just say, that it never hurts – as a writer of paranormal fiction – to live in a location so steeped in history and the supernatural.
This year then, I intend to take you on a trip around a few of the most significant of these and what better place to start than right on my doorstep – Denbigh.
The North Wales Hospital - also known as Denbigh Asykum – is a vast, imposing building standing out in its solitary and neglected position in the countryside, just outside the small market town of Denbigh in North Wales.
It is said that it stands on  ground cursed by witches who were once tried and executed there. It is said their restless, evil spirits still roam that lonely place…
Stone built between 1844 and 1848, the North Wales Hospital was the first psychiatric institution of its kind to be built in Wales and was then known as The North Wales Lunatic Asylum. It was considerably extended over the years, culminating in a capacity of 1500 live-in patients and1000 staff by 1956.
Here were performed many groundbreaking procedures for the first time: malarial treatments, insulin shock treatments, use of sulphur based drugs and later, the controversial electro convulsive therapy (ECT) and personality changing prefrontal lobotomy treatments introduced in the early 1940s.
Major reforms of the National Health Service over many years led to its eventual closure in 1995 and the building has been crumbling ever since. It is now in a dangerous condition and should not be visited by anyone as their safety cannot be ensured. It will be demolished and redeveloped, turned into offices and houses. They’ve been saying so for years, so it must be true. Right?
Of course, that is not to say that it is empty. The wind whips through collapsed rooves and whistles along vast, meandering corridors. Paint peels from walls and the many wards have long been stripped of anything of value. Its warped windows bang shut. Glass shatters from rotten frames. Pigeons and other birds make nests in its rafters. It’s a playground for the local feral cat population.
But they are not alone. Not according to armies of paranormal investigators who have set up camp there.
A team of fans of the paranormal who travel around the UK investigating possible hauntings, have reported their evidence on their fascinating website ‘Totally Haunted’ http://totallyhaunted.co.uk/denbigh-mental-asylum.php See what you make of the sounds they captured.
With so much notoriety, it was inevitable that the producers of the UK TV programme ‘Most Haunted Live’ should choose to pay it a visit and, in October 2008, they performed a special week long investigation there. Their presenter, Yvette Fielding, produced more than her usual quota of trademark, bloodcurdling screams as unexplained bangs, crashes and unusual sounds and sightings sent viewers scurrying for cushions to hide behind. Black magic, witches’ spells, curses and a ritual cleansing are just some of the phenomena that saw Dr Ciaran O’Keeffe, their resident parapsychologist, reaching for his latest techno-gadget. You can capture a flavour of it here http://www.youtube.com/watch?v=wFYDJcEl5X8&feature=related and here http://www.youtube.com/watch?v=tgihHtaX89A&feature=fvwrel
Sadly, ‘Most Haunted’ was axed by Living TV in 2011. I really miss that show. Great fun!
As for the hospital; is it ,or isn’t it? Are there any haunted places, or are they just echoes? Memories of times and events locked into a location and stored for posterity. Will we ever know for sure? In a way, I hope not. It’s nice sometimes to keep a little mystery…
Meanwhile, as they say in all the best crime shows – and paraphrased at the end of each episode of ‘Most Haunted’ :
“Don’t have nightmares. Sleep well…”
Posted by Catherine Cavendish at 12:27