Berwick - The Little Town that Could...

You may never have heard of it, but Berwick-upon-Tweed is the northernmost town in England. Its often fraught history goes back to Anglo-Saxon times when it was a small settlement in the Kingdom of Northumbria. In 1018 it was captured by the Scots and was then fought over repeatedly, changing from Scottish to English, back and forth no fewer than 14 times until finally settling on the English side of the border in 1482.

There is probably no other town in North East England that can claim such an eventful history. It stands, strategically, on the mouth of the River Tweed and was considered so important that King Edward I fortified it in the fourteenth century, supplementing the stronghold of Berwick Castle. Ramparts were built in Henry VIII's reign and modified under Mary I, Elizabeth I and then later in the 17th and 18th centuries.

It was a prosperous international port and trading centre and had a thriving shipbuilding industry for 200 years, finally ending in 1979, but it continued to be a garrison town until 1964. 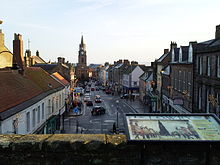 The town enjoyed such a special status that the declaration of the Crimean War had to be made in the names of 'Great Britain, Ireland and Berwick upon Tweed'. When the peace treaty was signed, Berwick's name was left off, meaning that the town was technically at war with Russia until the error was rectified in 1966.

OK, you've got the picture. Berwick is a relatively small town that has the capacity and history to punch way above its weight. You would think that, with all this rich past, its colourful history would be screaming at visitors from every street corner. 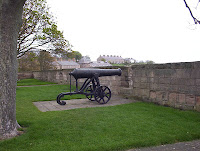 Sadly, not so. I was there, with my husband, a few weeks ago. There are indeed the impressive remains of the walls and ramparts and you can walk around them easily enough. It's only about a mile. The former barracks has been taken over by English Heritage and has been turned into a number of museums and an art gallery. There is the museum of the Kings Own Scottish Borderers and the 'By Beat of Drum' museum, showing life for an infantryman from the Civil War to the First World War. Certainly well worth a look.

But, for me, I wanted the history of the people of Berwick to flood over me and the Berwick Borough Museum, while quirky and a little eccentric simply didn't do it for me. Inexplicably, a walk-in Chinese dragon dominated the area, while the displays were quite imaginative but fragmentary and didn't serve to present any kind of timeline. Lack of space is probably a key factor here - but why not move to larger premises? There seem to be quite a few sizeable empty buildings around.
The local guide book, on sale at the Tourist Office in the main street, listed at least one museum that, when we found it, had clearly been derelict for a number of years, as had, sadly, a number of once fine Georgian buildings. Surely the National Trust could take on at least one of these and furnish it to tell the story of Berwick's prosperous Georgian past?

Of course, there's always the Lowry Trail. Artist LS Lowry used to holiday here and this is promoted with some enthusiasm.

There is still a lot of attractive architecture in Berwick, and the views across the river and its distinctive bridges, as well as the rare Cromwellian church, are well worth the day trip there, but we were left with an impression of a town that had lost its way somewhat since the garrison left and the shipyards closed down. We were told that a lot of people come there to retire, while others buy second homes there. Maybe this is part of the reason why a lower profile is maintained. Maybe the incoming people like a quiet life and don't want hoardes of tourists all year long, like Bath or York or other significant towns and cities.

But the price paid seems a harsh one. So many once grand buildings left to decay and a need to have to search to find out the real history of the people of Berwick whose lives were played out against such a rich tapestry. I think this town's unique history and traditions deserve more overt celebration.

In all fairness, I must applaud the Berwick-upon-Tweed Preservation Trust who, since 1971, have done stirling work in renovating a number of the town's listed buildings. I am sure the picture would be far worse without them.

Do you know of anywhere that isn't, in your opinion, doing itself justice? I'd love to hear about it.


Posted by Catherine Cavendish at 17:28