The Haunting of Ruthin Gaol

The Denbighshire Free Press included an article recently following an appeal from a former Ruthin man curious to discover the identity of the ghost of a young girl he had encountered 63 years earlier.
The girl was blonde, her hair in ringlets, and she wore a blue dress. When David Thorp saw her, she was walking slowly up Upper Clwyd Street. It was night time and she was illuminated by the light from a window, but she cast no shadow and appeared to be floating slightly above the ground.

When the paranormal events assistant at the gaol (Karen Messham), read of his experience, she contacted him. His description matched that of the daughter of a former governor. Her name was Josie Walmsley and she was born in 1862. Ms Messham says she has spoken to Josie many times as the young girl plays in the gaol, slams doors and has allegedly been recorded, singing the alphabet.

She is, however, not the only ghost to haunt the cells and walkways of the prison.

John Jones escaped twice - once in 1879 and then in 1913 when he was shot and died soon afterwards. Now he doesn't seem able to leave.

William Kerr, Ruthin's cruel and infamous Gaoler from 1871-1892, used to beat and starve prisoners as well as infuriate them by jangling his keys outside their cells. One day he simply disappeared, having left the Gaol on a perfectly normal day. No one knows what happened to him but his jangling keys and incessant banging on cell doors can still be heard today.

Then there's William Hughes who was the last man to be hanged in the Gaol. He murdered his wife and on the 17th February 1903, six people watched him die for it. But he has never left... 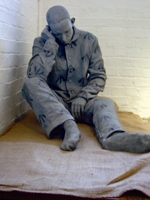 Ruthin Gaol is open to the public and is a creepy enough place in the day time, but a number of paranormal groups have staged night time vigils and reported many strange phenomena. Mists have appeared in cells (see photo), people have been touched, one investigator was sworn at as she explored a lower cell, one person felt as if they were in cold water up to their chest and experienced a sense of panic and voices were picked up on a camcorder that hadn't been heard on the night, including an entity that called himself 'Jake'.
Do you dare to visit the ghosts at Ruthin Gaol? Here's the info you need: Ruthin Gaol
and here's a Film Clip you may find interesting. As I always say - don't have nightmares...

Posted by Catherine Cavendish at 13:30