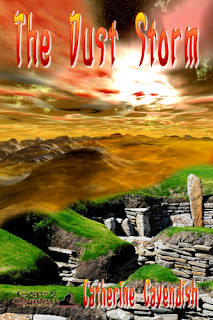 I am delighted to announce that my futuristic short story,  'The Dust Storm' has just been published by Gypsy Shadow Publishing.

In an apocalyptic Britain of the future, Domenica and her husband, Leon, win a Lottery - a chance to escape the lawless and hopeless world they live in, for the faraway green fields of Orkney, as the inhospitable climate encroaches ever more northwards.

Every minute of their lives is a battle for survival, while the ever-threatening danger of the killer Dust Storm has cast a cloak of darkness over generations of their people.

In the cool reddish-green of a November dawn in the 24th century, Domenica Sarsen stands at her doorway and looks out over the filthy street, hugging her secret to herself. Soon she and her husband will leave the sprawling, gasping metropolis of Carlisle and head for the green fields of Orkney, where the Rampagers will never find them and they can live out their lives in peace. If only they can out-run the Dust Storm…

Domenica Sarsen hugged herself in the cool reddish-green of a November dawn and inhaled the dry air, only to exhale in a fit of coughing. Even at seven in the morning, before much of the world was up and about, the atmosphere tasted rank and toxic. It was the same every day but for Domenica and her husband Leon, today was different. Today they would leave the sprawling, gasping metropolis of Carlisle for the green fields of Orkney Islands far to the north, off the coast of Scotland, and they were never coming back.

She stood at the battered front door of their shared house; her gaze traveled up and down the dusty street. Years ago this would have been a busy road, teeming with cars and lorries and all manner of engine noises unfamiliar to Domenica. It would have been covered in tarmac; where now it was rutted, littered with remnants of hardcore and little more than a wide dirt track. Then, traffic fumes would have polluted the atmosphere, where now lingered the more earthy smells of human habitation in a world devoid of fancy chemicals to sweeten the air and the inadequately washed bodies. Where dogs and cats might have played, now there were none, and at night, as she lay awake, Domenica heard the scratching of rats and the scurrying of roaches.

But it would all be different in Orkney. The Lottery people had said so and Domenica felt that surge of joy she had contained inside her since they had heard the news three days earlier. It would never do to broadcast such good fortune. The Rampagers might hear.

“I heard you coughing. Are you sound?”

Domenica turned to her husband who had come up behind her. “I’m sound, Leon, don’t worry.”

“You’re not getting the old trouble back are you?”

Domenica shook her head. “I shouldn’t think so. I think they got it all out when they gave me the replacement lungs. Toxic Dust—something else to thank our forebears for!”

Leon wrinkled his nose. “Our ancestors have a lot to answer for, burning fuel like there was no tomorrow.”

Domenica agreed, her lip curling as it always did when she thought of the profligacy ultimately leading to such global warming that two thirds of Great Britain was now an uninhabitable arid wasteland. “Thank God for President Norton. My grandfather said that if it wasn’t for him and others like him, even this place would probably be a desert now and, let’s face it, it’s not far off it.”

“Yes and imagine what it would have been like if he hadn’t banned all fuel-driven transport?” Leon ran his fingers through his wife’s fine blonde hair, taking care not to snag it and pull out any more. After all, she was twenty-four now. At her age, a lot of women were already wearing replacement hair. At this thought, Leon unconsciously rubbed his own bald pate and found himself wondering what color his would have been now if he had been lucky enough to keep it.

“Was it Norton who moved the capital up to York? I get him and President Steele confused,” Domenica said.

“No, it was definitely Norton. He was also the one who organized the mass evacuation of the south of England and Wales during the Forty Year Dust Storm. My granddad was only a child at the time, but he remembered the terrible choking fumes and people dying on the streets of London, unable to breathe.”

Domenica shivered. “They must have been awful times. My grandma told me she remembered her mother crying when the doctor told her she must be sterilized as part of the population reduction program.”

“Well, at least she’d had her one child. Now we’re not even allowed that! I’ll never understand why they turned down our application to breed. What’s so wrong with us? We’re normal, intelligent people, but clearly our gene pool wasn’t strong enough for the Population Control Board.”

“Welcome to life in the twenty-fourth century,” Domenica said.

'The Dust Storm' is available from:
Amazon.com
Amazon.co.uk
Barnes and Noble

Posted by Catherine Cavendish at 12:30