Harry Potter and the Vampire of Alnwick Castle 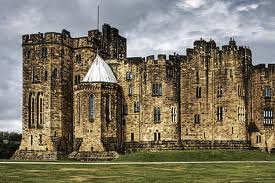 Alnwick Castle, situated right in the centre of the historic town of Alnwick, Northumberland, is probably best known these days as the backdrop for the exterior of Hogwarts in a number of scenes in the Harry Potter films. It's seriously large, seriously interesting, and was once seriously haunted by a vampire. 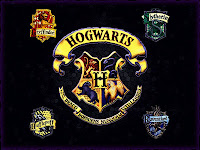 Still home to the historically important Percy family - hereditary Earls of Northumberland since the 14th century - this vast castle has seen plenty of action over the years and some of it has undoubtedly left its mark. In some cases, in grim and grisly ways. 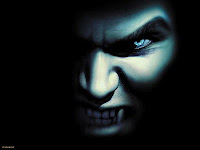 One of these has come to be known as the Alnwick Castle Vampire, documented by the chronicler William of Newburgh, who, in the twelfth century, made it his business to record accounts of vampires throughout the land. At Alnwick, he wrote that a man he called the Lord of the Estate, reputed to be a wicked philanderer, suffered the supreme irony of having a wife who was unfaithful.  Deciding to catch her in the act, he hid on the castle roof, in order to peer down at her bedroom, but was startled by the appearance of a young man from the castle. Losing his balance, he fell to the ground and died the next day.

But he didn't stay dead. Soon, his stinking, rotting corpse was seen (and smelled) by the villagers as it wandered the streets at dead of night, attacking anyone it met and drinking their blood. People became scared of encountering it and began staying at home and locking their doors at night. When it was also said that it caused an outbreak of plague, this proved too much for the villagers and, on Palm Sunday, some of the leading men were led by the local priest to the cemetery where they dug his body up from its shallow grave. 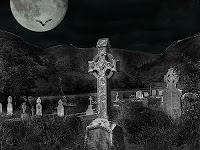 They were horrified by what they saw. The body appeared engorged with fresh blood and, when it was hit with a spade, this gushed out in a mighty flow.

The villagers dragged the body out of the town where it was burned to ashes. Soon after, the epidemic ended and all was peaceful and quiet again.

Until...
It is said that beneath the castle and the town lie a warren of underground and secret passages. Strange, unearthly creatures are said to live down there and some are so dangerous, Enochian* magic seals have been used to prevent them escaping. But what if one has got out? 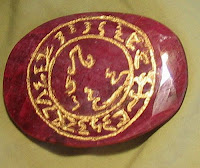 Not too long ago, the sight of a hunched man has been reported roaming the castle grounds at night. Sinister, as yet unexplained, there are those who wonder...

Only time will tell...

*Enochian Magic is a form of ceremonial magic based on the writings of Dr John Dee, adviser to Queen Elizabeth I. In it, powerful spirits are summoned. For more information, see Enochian Vision Magick

Posted by Catherine Cavendish at 11:39