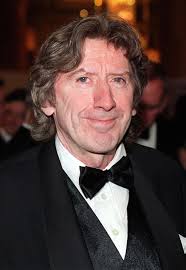 Yesterday evening brought the sad news that one of the greats of British horror writing - James Herbert - had died at the early age of 69.

In common with many on this side of the pond, I became a James Herbert fan bedfore I discovered Stephen King. In fact, it is entirely possible that without being scared witless by The Rats and then The Fog, it may have taken far longer for me to pick up Carrie.

Today, other authors have been paying tribute to him - both personally and professionally. Ian Rankin said on Twitter, "Sad news about James Herbert - as a teen, I scared myself silly reading him. He led me to King, Barker, others. RIP." I think many will identify with that.

For me, James Herbert represented a different kind of horror to that I had previously read. Growing up with Edgar Allen Poe, Dennis Wheatley, M.R. James, and the wonderfully camp Hammer Horror (which, was so safe because it could never happen to you!), Herbert's books were frightening not only because they were more visceral but also because...well, you know...it could just happen...There really could be some previously undiscovered gas released by an earthquake that turned people into homicidal maniacs. And as for rats - they're clever. If they organised themselves like that, they could be a whole lot more terrifying than the Cravendale Cats with Thumbs!

No, if rats organised themselves, perhaps it really could be like this:


That plausibility was one of Herbert's hallmarks (for me at any rate) and also, I believe, one of the key factors that kept his many readers returning, book after book. Like Stephen King, he took horror to another level and set a standard others still strive to achieve.

In all, James Herbert published 23 books in his lifetime. There was a big gap (6 years) between The Secrets of Crickley Hall - recently shown on TV as a mini-series - and Ash, the paperback version of which was only published last week. Sadly, many readers felt this last novel failed to live up to its predecessors.

In Faces of Fear, a book comprised of interviews with British and American writers, he is quoted as being "very insecure as a writer. I don't understand why I am so successful. And the longer I stay that way, the better it's going to be, because that's what keeps me on the edge, striving if you like."

RIP James Herbert and thank you for all the scares.
Posted by Catherine Cavendish at 13:30