Win A Copy Of 'Fire Within' - The Latest from Ally Shields

Congratulations to Ally Shields,whose latest urban fantasy - Fire Within - has just been published.

To celebrate, she's offering you a chance to WIN A COPY of one of her two great books. Here she is to tell us all: 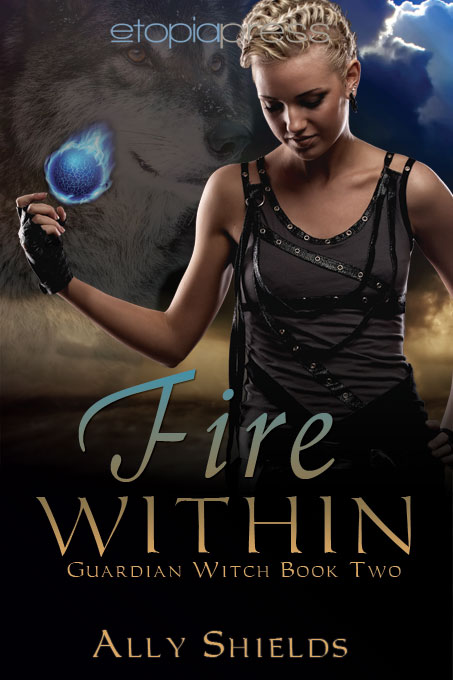 Hi, everyone! I'm so excited to be on Cat's blog for the big reveal of Fire Within, book two in the Guardian Witch urban fantasy series. It was just released this weekend, so I'm eager to tell you about it.

First of all, I have to confess that I love these characters. If you haven't met Ari, Ryan, Andreas and all the rest, I hope you'll check out the series. And I'm going to make it easy for you! If you leave a comment (and your email so I can notify the winner), you'll automatically be entered in a drawing for your choice of  Awakening the Fire (Book #1) or Fire Within (Book 2)!

A hidden evil stalks the city...

Fire witch cop Ari Calin refuses to believe her human friend Eddie murdered a vampire—in spite of his confession. When a second vampire dies, Andreas, the sexy, charismatic vampire she dated and split from eight months ago, joins her in the hunt for the real killer.

But Riverdale may have a special kind of serial killer who's looking around for the next vampire victim. The roles of hunter and hunted become murky. And while unterHunAri might feel like killing Andreas at times, she doesn't want anyone else to do it...

(The morning after the vampire murder, Ari is questioning patrons at the bar near the spot where the victim died, looking for other possible suspects.)

“I must be confused,” said the young man seated next to her. “Why are you asking about other enemies? I thought Eddie confessed.”

“It’s routine. We’re still looking for answers. For instance, the missing gun. If you remember or hear anything that could help us find it, please give me a call.” Ari handed out her business cards.

The young man pocketed the card with a frown. “Still don’t get it. You act like Eddie might be innocent. Why would he admit to the shooting, if he wasn’t guilty?”

Ari raised her eyebrows. “That’s the question, isn’t it?”

Amazon.com
Barnes and Noble
ARe

Ally Shields was born and raised in the Midwest, along the Mississippi River, the setting for her urban fantasy series. After  a career in law and juvenile justice, she turned to full-time writing in 2009, and Awakening the Fire, the debut novel in her Guardian Witch series, was released in September 2012.  Ally still lives close to the Mighty Mississippi with her Miniature Pinscher, Ranger. When not writing or reading, she loves to travel in the US and abroad. Way too often she can be found on Twitter.

Thank you for being my guest today, Ally. I wish you all the best with Fire Within. I know I'll be reading it. I loved Awakening The Fire.