The Sad Tale of Betty Corrigall - The Wronged Lady of Hoy 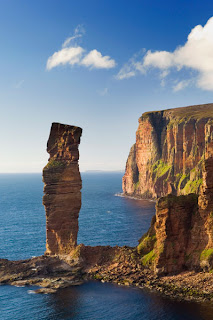 The wild and windswept island of Hoy, with its magnificent stone stack known as the Old Man of Hoy, lies off the north coast of Scotland and is part of the magical and mysterious group of islands known as the Orkneys. The glowering mountains, and ever-changing colours of the landscape provide an atmosphere that is at once dramatic and romantic.

The long winter nights, clustered around roaring fires, provide ample opportunity for the retelling of tales of magic, fantasy - and in this case, tragedy. For the tale of Betty Corrigall is a story of a young woman who died for love.

She lived at Greengairs Cottage on the island, in the late 1770s, and fell in love with a man who, on discovering she was pregnant, deserted her and went off to sea. She was never to see him again. Single, aged 27, and living in a strict Christian community, Betty's life was ruined as, one by one, her family and neighbours shunned her. 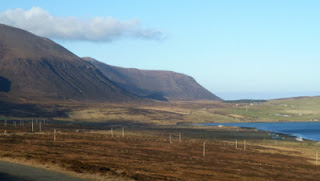 Desperate and alone, she grieved for her lost love and betrayal. Then there were the practical fears. With no one to support her, how would she live? How would she feed her baby? Her situation seemed hopeless and Betty saw no way out for her or the baby she was carrying. One day she walked into the sea, with every intention of drowning herself. But someone saw her and she was rescued. Now, of course, she had added yet another deadly sin to her list of crimes and her plight was even more desperate.

Just a few days later, she took some rope and hanged herself, killing both herself and her unborn baby.

But Betty's shame wouldn't end there. As a suicide, she was denied a Christian burial and the Lairds of Melsetter and Hoy refused to have her body on their ground too.So poor Betty was laid in unconsecrated ground, in the middle of the peat bog that forms so much of the interior of Hoy. There she lay isolated, on that bleak and barren moorland, in an unmarked grave on the boundary of the parishes of Hoy and Walls.

The years passed, her relatives and neighbours died and she was forgotten. 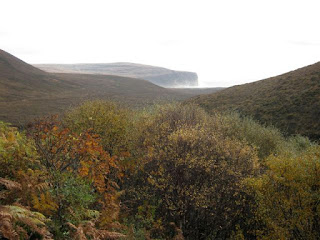 Then, quite by chance, in 1933, two men were out digging for peat and came across a wooden box. They recovered it and opened it. To their shock and amazement, there lay the body of a young woman, her long dark hair arrayed around her shoulders. The peat had ensured she was in a remarkable state of preservation, albeit with her skin tinged brown. Beside her, lay the rope with which she had hanged herself, although this apparently crumbled to dust when exposed to the air.

The Procurator Fiscal ordered that the body be reburied where it had been found and, but for World War Two, she would have once again sunk into obscurity. 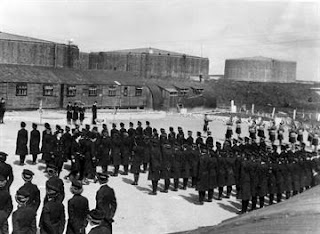 Lyness, on the coast of Hoy, was a major naval base during World War Two and thousands of British troops flooded the island. The peat bank was once again dug - this time by a working party of soldiers - and her unmarked grave was rediscovered. This time, there was to be no peaceful reburial. The soldiers were fascinated by the remarkable state of preservation and, time and again, her coffin was reopened. But repeated exposures to the air ensured rapid deterioration of Betty's corpse.

Eventually, officers ordered that the grave be moved fifty yards and a concrete slab placed on top of it. Still, though, her grave remained unmarked.

Finally, in 1949, an American minister by the name of Kenwood Bryant, heard the sad tale and decided Betty had suffered long enough. He erected a simple wooden cross over her gravesite and surrounded it by a little fence. He then requested Harry Berry (Hoy's Customs and Excise Officer at the time) to cause a suitable gravestone to be erected. 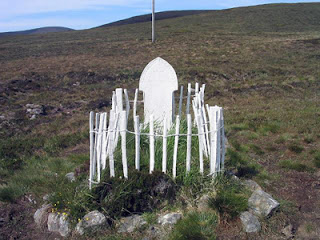 This did not happen until 1976,when a small headstone made out of fibre-glass (stone would have sunk into the peat), was erected as part of a small, quiet burial service performed at her graveside. Her headstone reads, 'Here lies Betty Corrigall'.

So Betty lies there now, in the wild and lonely tranquillity of Hoy.

The young woman who died for love, finally rests in peace. 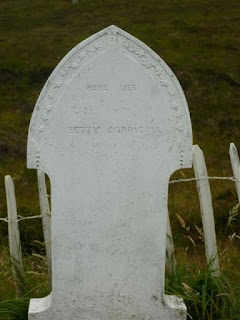 To learn more about the history and traditions of Orkney, visit Orkneyjar
Posted by Catherine Cavendish at 13:16