This Is No Pussycat - It's The Beast of Bodmin Moor

Conan Doyle had his Hound of the Baskervilles howling away on Dartmoor, yet a few short miles away lies the bleak and, at times, forbidding stretch of Bodmin Moor where, it is said, a giant panther-like creature roams, slaughtering livestock and terrifying all who set eyes on it.

Scientists will tell you it's all nonsense. One animal couldn't possibly survive like that. If it exists at all, it must be part of a sizeable breeding population and the environment simply couldn't sustain it. But the stories won't go away. Animals have been slaughtered, although official investigations have said there was nothing to indicate the presence of any exotic roaming animal, either there or anywhere else where these phenomena have been reported. But, since owning such an exotic species privately is illegal, if you lost your pet panther, would you report it to the authorities? 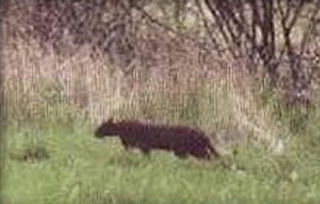 On Bodmin, less than a week after the 1995 official Ministry report concluded that there was no evidence to show such an animal existed, a boy was out walking near the River Fowey when he came across a large feline skull, some ten centimetres long by eighteen centimetres wide. When examined by the Natural History Museum in London, they confirmed that, despite its missing lower jaw, it was the skull of a young male leopard. Excitement began to mount.

It was shortlived. Detailed investigation showed the animal had died outside Britain. Also, within the skull was an eggcase belonging to a tropical cockroach. They found the skull had been cleanly sliced off and the skin scraped off with a knife - in exactly the fashion used for leopard skin rugs. Decomposition had set in recently, when it had been immersed in water. So, it was an imported rug, someone didn't like it and dumped it in the river. Excitement over. For now. 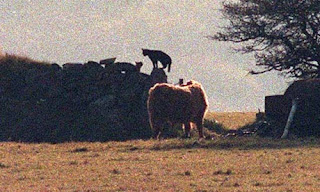 But the story wouldn't go away. All in all, between 1983 and 1998, sixty big cat sightings were reported in and around the area and, today, many local people firmly believe that, whatever the scientists say, a big cat population lives on Bodmin Moor. In October 1997, officials from Newquay Zoo identified pawprints found in mud as the fresh tracks of a puma and this was backed up by a photograph published soon after, which showed an adult puma - probably a pregnant female.

The sightings continue, along with much fuzzy and inconclusive video footage (some of which can be found on Youtube). Wildlife expert, Trevor Beer, who has spent many years studying big cat phenomena, maintains that there could now be as many as twenty, roaming around the Moor. Those who have heard the animal say it makes the sort of hissing and growling sounds you would expect from a panther or puma, but it also emits a horrendous scream - like that of a terrified woman.

It is perhaps fitting that such a legendary beast should inhabit such a magical and mystical landscape. It has ancient stone circles to wander amongst and tracts of land shaped like signs of the zodiac. Knights Templar once met here and the now defunct mines were reported to be full of demons...