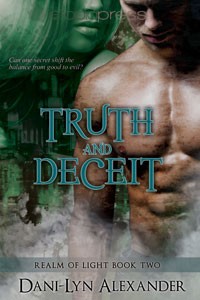 A suspicious past, a daunting secret, a forbidden romance... How much does it take to tip the scales from good to evil?

When Lexie Davis wakes to find herself surrounded by luxury with no memory of who she is or how she got there, the fear all but suffocates her. But learning the truth about her circumstances will scare her even more. Desperate for a way to regain her life, Lexie tries to piece together the past. But ghosts from her childhood make it hard for her to let go of her secret—a secret that could force her to spend eternity in Darkness.

Deceived by the woman he loves, abandoned by the brother he trusts, Matthew Hayes struggles against evil to win the battle for his life. But when he wakes to find Lexie sobbing softly at his side, he makes a heartbreaking discovery. Not only is their love forbidden by the most ancient laws, but she has been keeping an unbelievable secret from him—he has a child. The child could give him the strength he needs to defeat the Regulators…if it doesn’t destroy him first...

Now, for an excerpt: 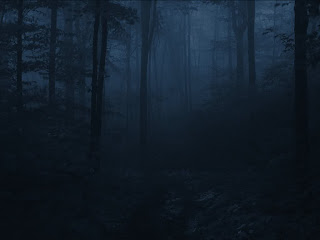 She ran. Her breath came in short, shallow gasps, her heart pounding, her lungs burning as she clutched the infant to her chest and poured all of her energy into escape. An unnatural darkness flooded the night. There was no moon visible, no stars peeking through the dense fog. Thankfully, she knew these woods well, had grown up here, playing manhunt with the rest of the kids from the neighborhood. Only this was no game; this hunt was all too real, the consequences of being caught, severe.

Her eyes strained as she tried to watch for obstacles, fallen trees, puddles, patches of wet leaves. She had to keep her footing. A fall now could be deadly. Mud oozed between her toes as it filled the sneakers she had quickly shoved onto her bare feet.

Between the darkness and the fog, she could barely see where she was going. Yet, she didn’t dare slow down. Nor did she risk a glance back over her shoulder, afraid fear would paralyze her if she saw him coming.

She tried to listen for the telltale sounds of pursuit, but other than the sound of her own footfalls, the sucking of the mud each time she lifted a foot, and the pounding of her own heart, silence mocked her. Too much silence, the kind that warned of a predator on the hunt. But these woods had no large predators. Skunks, chipmunks, squirrels, even an occasional fox made their homes here. There were deer, beautiful, graceful, but not dangerous.

And then she heard it. A large branch snapping, the sound like a shotgun blast echoing in the silence. She knew that sound. When she and her friends were kids, they would hang around the woods, often bored, snapping the dead branches that littered the ground. She also knew that she was meant to hear it. He moved too stealthily for the noise to have been a mistake. It was part of the game, to ratchet up the fear, let her know just how close he was.

She looked around wildly, trying to get her bearings. Had she missed the trail that turned off and headed toward the canal? The shadows pressed too closely, she couldn’t tell. She had to find it before he reached her. Desperation had her risking one quick glance down at the baby. That was all it took to ground her—one peek at the helpless child depending on her.

She took a deep breath and looked around again. She had to find the trail and make it to the boathouse by the canal. Men often hung around down there late into the night, drinking beer, playing poker, enjoying the break from work and home. There would be help there, people to protect her and her baby.

When she recognized the fallen tree, where she had shared her first kiss with Jimmy Hessler, the first glimmer of hope since this chase had begun shivered through her. The path lay directly in front of her. She was almost there. A few more steps and she’d be on the trail where she could run full out. She could outrun him once she was out of the thick underbrush. She wouldn’t have the mud grabbing at her feet, the thorns tearing at her legs, or the undergrowth tripping her. She’d run track in high school, had run cross-country through these very trails, and she was fast. The fear prodded her to move even faster, adrenaline coursing through her bloodstream. Optimism soared as she covered the last few feet that would lead her to safety.

She felt a sting in her back, and she went down hard. She curled her body over the baby as best she could, trying to offer as much protection as possible. She landed hard on her right side, her hip slamming into a rock, sending pain shooting all the way up her side and down her leg. An explosion of light burst in front of her eyes as she struggled, fiercely, to hold on to consciousness. She fought against the eddy of blackness closing in on her from both sides, tunneling her vision.

As she dragged herself slowly forward, she spotted the old tree on the corner of the trail. She used her left foot to push herself forward, grabbing hold of anything she could reach to pull herself toward the tree. Thorns tore at her hands, her hair, her face; excruciating pain shot through her back. She clutched the baby to her breast. Sheer determination propelled her the last few inches to her goal. When she finally made it, she pushed the bushes aside and placed the swaddled infant into the hollow at the base of the tree, praying it wouldn’t start to cry until the man had gone. Praying it would cry loud enough to attract help once he had. She took one last look at her child. “I love you, my baby,” she whispered, and allowed the thick bushes to spring back into place, effectively camouflaging the tentative hiding place. Then, using the last of her energy, she pushed away from the tree and rolled over, coming to rest facedown with the lower half of her body still resting in the leaves and brush, and her upper body lying across the trail she had been so desperately trying to reach.

When he reached her, he didn’t even bother to bend down, just used his foot to roll her onto her back. A jolt of surprise shot through him when he realized the infant was not underneath her. It shattered his arrogance and drove him to his knees. He pawed frantically through the brush, searching for the child. He didn’t need a light, was used to the dark and could see as well as if the sun were illuminating the shadows and fog that covered the ground.

There was no baby.

Sweat sprung out on his forehead. Where was it? Had she left the child somewhere? A chill crawled down his spine. Had it even been with her when she’d fled the apartment?

The sudden realization that he had just gone from the hunter to the prey brought with it true, gut-wrenching fear.

You can read on by purchasing from any of these sellers:

Amazon.com
Barnes and Noble
ARe
Kobo

Truth and Deceit is Book Two in the Realm of Light series. If you haven't read Book One - Trust and Betrayal -  here's the blurb: 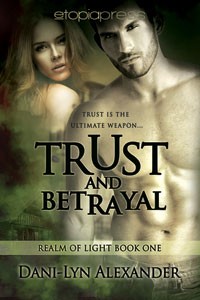 Trust is the ultimate weapon in the battle against evil.

Single mother Shay McKeon is no dummy—she’s intelligent as well as street-smart. But when she receives a phone call threatening her children, she rushes headlong into the hands of evil.

Saved from certain death by Mason Constanza, who calls himself a Guardian, Shay is taken to the Realm of Light, where she learns her husband never abandoned her as she’d thought, and that good and evil are nothing like she’d imagined. Learning to deal with her own existence as a Guardian, Shay’s attraction to Mason grows. But she has her own demons to battle, and when her daughter is abducted, she’ll have to trust Mason and his team. But Mason has his own ancient battles to fight…

You'll find Trust and Betrayal at the following online retailers:

Amazon.com
Barnes and Noble
ARe
Kobo

You can find Dani-Lyn here: