A Slip In Time - a Ghost Story 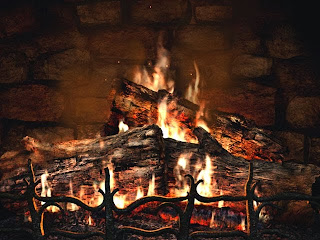 Now the year has moved on to the time for blazing fires, toasting crumpets and dark nights, curled up with a creepy ghost story, here’s a strange tale I first presented as a guest on a blog in early 2012.

What follows is an episode from my misspent youth and I present it as it happened:

Sitting around a blazing fire one winter’s evening in 1976, six of us workmates, all young women, were persuaded—no doubt courtesy of a few glasses of Litre Vin—to share the strangest experiences each of us had ever had.

One by one, we trotted out tales of times we had correctly predicted what another person was going to say before they said it, and objects which had apparently zapped themselves into the Twilight Zone never to be seen again. I seem to recall, I told of  the time I was sure I had seen someone standing on the stairs, only to find there was no one there.

Then it was Sandra’s turn. She was a quiet girl. In her early twenties like the rest of us, but more studious and inclined to be shy. At first she was reluctant, but there was something in her eyes that made me certain something quite momentous had happened to her, if only we could persuade her to share.

Jill opened another bottle of wine and poured her a glass, filling it pretty much to the brim.

Now I was certain. This was going to be the best of the night. “Oh, please tell us, San,” I said with, I’m sure, my most imploring expression.

The minutes ticked by until, worn down by our constant insistence, Sandra set her empty glass down on the table, took a deep breath and began.

What follows is my best recollection of what she shared with us that night: 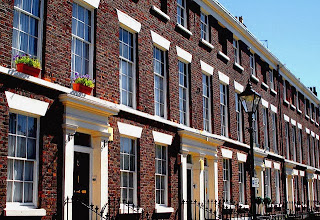 “I was eleven years old,” she said, “staying with my cousin in Liverpool during the school summer holidays. They lived in a big Georgian house near the Cathedral. All the streets around had these old streetlamps and it was really atmospheric. At night it was quiet and my bedroom overlooked the road.

“One night, it was stiflingly hot and I had my window open to let in some air. I lay there, tossing and turning but still couldn’t get off to sleep.

“Then I heard the sound of some horses trotting along the road. Thinking it was probably police—they  patrolled on horseback around there sometimes in those days—I thought nothing of it and turned over yet again.

“Then I heard more sounds of a horse’s hooves clip-clopping along the street, then another, and another.

“Curiosity got the better of me and I pushed the covers off, got up and went over to the window. What I saw then, I’ll never be able to explain and will never forget to my dying day. Furthermore, I swear it’s true and I wasn’t dreaming.”

You can imagine that, by now, five pairs of eyes were riveted to her and each one of us was sitting on the edge of our seats.

Sandra looked as if she was about to change her mind and stop right there, but no way would we let her, so she took another deep breath and carried on: 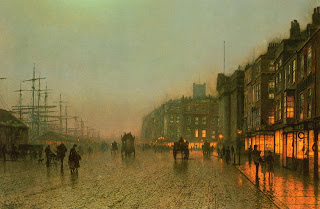 “I pulled the curtain aside and the first thing I noticed was the streetlamp. It was basically the same lamp, but it wasn’t electric as I’d thought. It was one of those old gas lamps, straight from the nineteenth century. I couldn’t think how I’d missed that before. My room was on the second floor so I had a good view of it.

“But the biggest shock came when I looked down. It was dark and the streetlamps only cast a dim glow, but instead of parked cars and brightly lit house windows, were a couple of hansom cabs, a couple dressed in Victorian clothes walking slowly up the street and, in some of the windows, flickering lights that I guessed came from candles.”

Gasps and incredulous looks greeted this. Surely, any minute now, she would tell us she was having a laugh at our expense. But no. 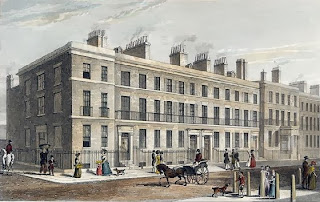 One of us—Jill, I think, asked if there had been any filming going on there for some historical drama. Liverpool’s Georgian streets have been used as an authentic backdrop on many occasions.

She insisted that there had been no filming. So what had happened next?

“I stood there, mesmerised, for ages. I don’t know how long but I do remember that it was starting to get light when I crawled back into bed. I fell asleep to the sound of horses’ hooves and woke up to a motorbike revving its engine. I leapt out of bed and rushed to the window. The first thing I checked was the streetlamp and it was, of course, electric. Down in the street were the usual parked cars and people in modern dress going about their business. I never dared tell my cousin because, at that moment, I was firmly convinced they would think I was mad. In fact, you’re the first people I’ve ever told.”

And, thanks to our sceptical reactions, we were probably the last she told too!

Poor Sandra. I’ve always felt guilty about how we treated her, insisting she must have been dreaming when she was so adamant she wasn’t. She never again came out with us, and got a new job soon after. From then on,  I never saw her again.

So, was she telling the truth? 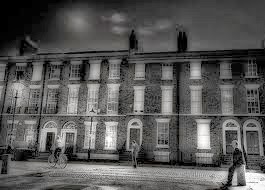 You have to decide for yourself of course, but I will never forget the sincerity in her eyes as she told her strange story. Was there some kind of timeslip on that hot July night? And did she ever go back there and experience it again?

Posted by Catherine Cavendish at 14:11