Cats and Ghosts - "There Are More Things In Heaven and Earth..." 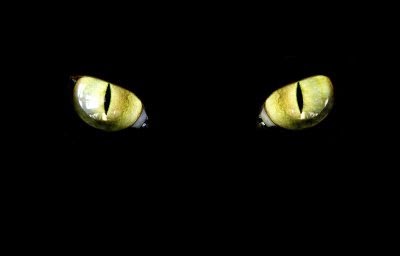 Moving into my third month in a cat-less home – and a haunted one at that – there’s a wealth of things I miss now Mimi is no longer around to keep me in order. One among many is the (probably) daft notion I had that as long as she didn’t stare off into the distance, her attention caught by something - or someone - I couldn’t see, I was safe from any threat of the supernatural variety.

OK, send for the men in white coats and cart me off to the padded cell. It’s a hangover from childhood. When I was a small child I read somewhere that cats have a highly developed sixth sense and know about these things. Moreover, they can see ghosts, and react to them and a host of other paranormal manifestations.

This belief has somehow managed to evade any attempt at logic or maturity brought on by advancing years, and a lingering tiny – yet significant – number of brain cells have clung together in the hope that what I read was true. You see, since the age of six, I have only ever spent a grand total of eight, now going on nine, months without a cat to ‘protect me’ from things that go bump, creak and slither in the night.

A number of dog owners I am acquainted with have a similar belief (so I’m not entirely mad, or, if I am, I’m in good company). A few have told me of scary instances of their dogs gazing transfixed into a dark corner of the room, whimpering sometimes. Or maybe it was the humans who whimpered.

Mimi's relationship with any other dimension was to treat it with casual indifference. If it didn't interefere with her daily routine, why bother? Mind you, she was, without a doubt, the most laid back feline I have ever known. In fact, she was so laid back as to be pretty much horizontal. She fell thirty feet from a window when she was a year old and her reaction was to trot off, unscathed, to sit under a car by the front door, waiting to be rescued. She behaved in similar fashion when she fell through a neighbour’s greenhouse roof. She sat on a shelf among a load of plants and did her best impression of a potted azalea, until I found her. To such a blithe spirit, the sight of a ghost would be more likely to be welcomed by a demand for food and a cuddle rather than a hissy fit.
In our haunted flat, she developed a knack for disappearing completely and then suddenly reappearing. I liked to think that maybe she slipped into another dimension and went off for the day with our resident benign and invisible (to us) spectre. All right – I’m digressing into the realms of fantasy. Probably.

Mimi’s predecessor was a semi feral tabby tom called Jennie (long story). He was not the horizontal sort. Jennie was alert to every aberration, sound and visual disturbance. I can recall a number of occasions when he focused on something I could neither see nor hear.

In one house where we lived, the open plan staircase came in for his particular attention more than once. His ears would prick and he would stare at it. Hard. His hackles raised and he made that ominous growling that cats use to signal that they are thinking seriously about inflicting actual physical harm if the object of their annoyance doesn’t scarper. Quick. On those occasions, I would watch his gaze follow something that seemed to be making its steady way down the stairs. I saw nothing. I heard nothing. Only Jennie.

After a few minutes, he would stop staring, lick his paw and saunter off. The feline equivalent of shrugging his shoulders. I let out the breath I had been holding, picked him up and cuddled him. I would feel much better. Jennie had seen off the threat from… well I haven’t a clue actually.

A tiny insect perhaps? Invisible to me, but easily observed by an animal with far more acute eyesight? OK, but when was the last time you saw an insect walk down the stairs? And in any case, insects did not raise the hackles on my cat. He just batted them with his paw.

I am not alone. A quick search on the internet brought up dozens of similar results. I have read multiple accounts of cats staring transfixed at spots on walls where the human could see nothing. One eyewitness said they saw the ghost of their dead cat, Penny, and their current cat chased her. There are accounts of cats interacting with ghosts as if they are being stroked by them. And there are scores of stories of cats returning from beyond the grave to visit with their special humans one last time. Even my own sane and pragmatic mother had a similar experience to this.

I particularly like one (possible) 'cat ghost' story I read recently. It all began some years ago in Pennsylvania – at Halloween. A young man was riding his bicycle in a small town north of Pittsburgh. He heard pitiful mewing coming from the side of the road and discovered a little black kitten, clearly lost or abandoned. The man picked up the tiny bundle of fur and took her home, where he introduced her to his resident cat, Biscuit. Needless to say, the older cat was less than pleased to receive a squatter. Months went by and the kitten – now named Cheddar – grew big and healthy. One day, the man decided to take some photos of the two cats together. As Biscuit had never got over his aversion to the kitten, this was a far from easy task. But the man managed to get them in the same room and snapped away, getting his shots of both cats.

He didn’t develop the film straightaway and, about a month later, Cheddar began to scratch and claw at the door, apparently desperate to get out.  She hadn’t done it before, but the man decided it would be cruel to deny her wishes. He let her out, but she never returned. 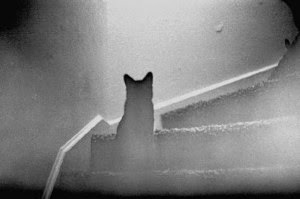 Some time later, he took the film to be developed. When the photos were returned he got the shock of his life. Despite his certain knowledge of taking pictures of both cats, there was not one shot of Cheddar. Biscuit was there – but always alone. Any shots that should have shown Cheddar did not contain even so much as the tip of her retreating tail. He double checked the negatives, but that proved fruitless as well. No trace was ever found of the little Halloween kitten.

Personally, I see no reason why animals can’t see beyond what we see. It is entirely possible that our evolution has robbed us of our own ability to sense the unknown. A lot of perfectly sane and reputable academics have conjectured that our ancestors many thousands of years ago were attuned to the earth’s magnetic forces in ways we have since lost. Hence their choice of locations for such gargantuan building projects as Stonehenge, Avebury and a host of other stone circles and megalithic monuments. There have been experiments, using highly sophisticated equipment, that reveal some very interesting and curious results. 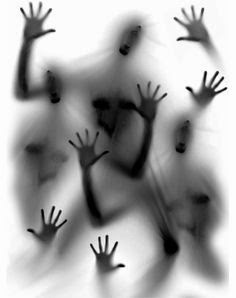 Even youngsters seem to sense things adults can’t. There are scores of stories of children describing someone they have seen who turns out to be a dead ringer (sorry!) for a long deceased relative. A friend of my mother’s had an unnerving experience recently when a very young granddaughter asked who the sad lady was who had put her arms around her. There was no one there, but the child was adamant and went on to describe her in minute detail.

So do cats see ghosts? Do they sense presences we cannot comprehend? I keep an open mind. And one eye open at all times, just in case…because I no longer have a cat to alert me to these things.

And, let’s face it, Shakespeare could have been right:

There are more things in heaven and earth, Horatio,
Than are dreamt of in your philosophy.
- Hamlet (1.5.167-8) 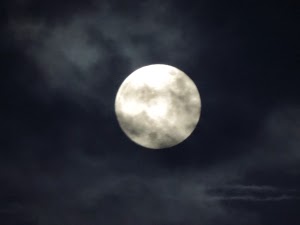 Posted by Catherine Cavendish at 12:41