The Eternal Fires of Ally Shields 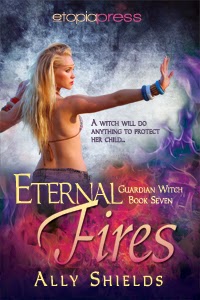 Crows are intelligent birds. Recent tests at the University of Auckland have revealed that they possess a similar level of intelligence to a seven year old child. Maybe that is one reason they appear to not only watch, but also learn from their observations. They work things out with almost uncanny accuracy - such as how to get water out of a tube by dropping stones into it to raise the water level.

A crow is, in avian terms, one smart cookie. Put a few of them together and you have a potentially deadly combination. Why else would a flock of them be called a 'murder'? Is it merely urban myth that they are capable of joining forces and working together against one of their number who has transgressed in some way? It is said that the very origin of the group term 'a murder of crows' stems from their habit of gathering in a sort of 'Star Chamber' court to decide the capital fate of one of their number. 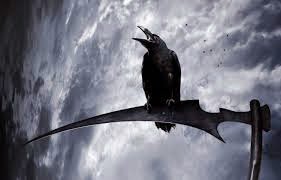 Crows in their many forms - from jays and jackdaws through American, hooded and carrion crows to magpies and ravens - feature in almost every culture's mythology. Indeed, the only place members of the crow family are not to be found is Antartica. They are associated with death in Irish mythology and are carriers of information to the gods in Norse legends. Ravens 'protect' the Tower of London. Many cultures fear them for their black feathers and sinister expressions - borne, no doubt, of that sharp brain and quick mind we now know they possess.

In Ally Shields' latest (and last) in the seven volume Guardian Witch series of Urban Fantasy/Paranormal Romance novels, crows play an intrinsic part. To give you a taste of what to expect, here's the blurb: 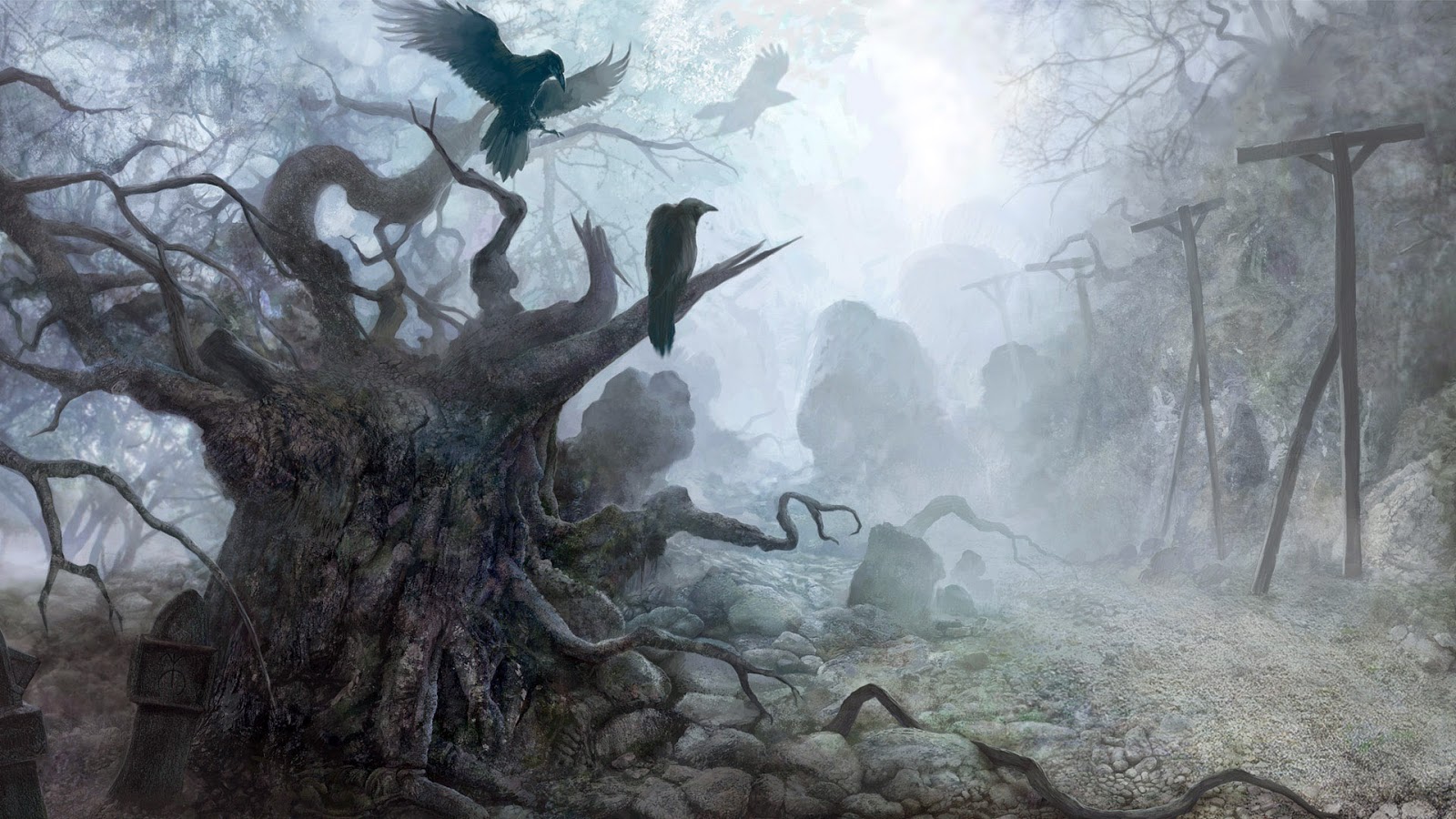 It started with the murder of a stranger. Then the crows appeared…

Ari and Andreas know the O-Seven will never leave them alone. Ari is carrying Andreas's mortal child, but the vampire elders are convinced the child will be the first vampire baby and are out to posses it. Or kill it. Either way, Ari and Andreas will do anything to keep their unborn child safe, even if it means Ari has to go into hiding and leave Andreas exposed to the O-Seven alone.

But then the O-Seven call on the Mahmo magic that can turn an elder into a winged killer, and each time Ari runs, they find her again. The only way to protect their child's future is to defeat the O-Seven, once and for all. And to do that, Ari will have to face the elders head-on in their castle stronghold deep in Germany’s Black Forest… 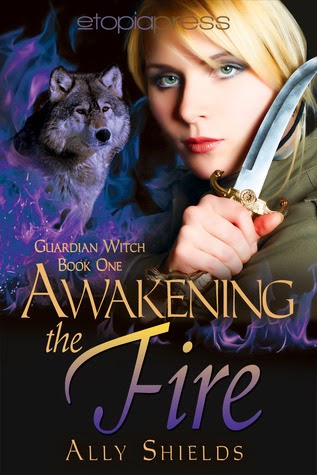 Exactly. Ari disconnected. During her conversation with the doctor, the bird hadn’t moved from its position on the fence. It was at least as large as a condor, and the murky haze around it wasn’t put there by nature. The creature cocked its head and stared at her. Witch fire tingled in her fingertips, but she calmed the magic and tightened her grip on her handgun.

Unless forced by circumstances, she wouldn’t use magical fire out in the open like this, where she might burn the farmer’s fields. And where motorists might observe her. Magic still caused a big stir—and a lot of fear—among humans.

“It’s not coming after us.” Ryan turned to look at her. “What did you mean by ‘a normal bird wouldn’t?’”

“It isn’t a coincidence that a flock of crows is called a murder of crows,” she said darkly. “They have a bad reputation. Their minds can be bent to evil by someone with the ability to call and control them—a werewolf, a witch or wizard, even a vampire. There are stories of powerful magic users who can morph into the creature’s form. Just look at it, Ryan. You can’t see the dark aura, but how do you explain that size?”

“Are you telling me that bird might be someone else? Someone supernatural?” Ryan’s hand moved to hover over his own pistol.

“Let’s find out.” Ari took off running, vaulted the fence, and headed straight for the crow. The creature stretched its head high before spreading its wings to their full span and lifting into the air. It released a loud caw and streaked away at astonishing speed. Ari came to a halt in the middle of the field. By the time Ryan caught up, she’d already put her gun away.

“Guess it wasn’t in the mood for a fight.” She shaded her eyes and watched the black object disappear into the horizon.

“How can a bird move that fast?”

Ordinary birds couldn’t. Ari didn’t bother to answer him. She started toward the fence line where the creature had perched.

“The residual magic might tell me what it is or who’s controlling it.”

Ryan didn’t comment, but she heard the cornstalks swish against his denim jeans as he followed her. He acted skeptical, which kind of surprised her after all the things he’d seen in the last three years. But Ryan had never been completely comfortable with the Otherworld. He’d rather believe the bird was genetically altered by some mad scientist than a magical manifestation.

She stopped at the wooden fence and ran her hands over the rails until she found a spot that tingled…and filled her with an unreasonable sense of dread. She lifted her hands and the oppressive feeling receded. Bad mojo.

“Hey, look.” Ryan pointed toward a black feather sticking out of the grass. He pulled a set of crime scene gloves from his pocket and handed them to Ari. “I suppose you need to handle it first.”

“You know me.” She snapped the gloves in place and picked up the glossy object. Scorching heat, devouring flames. “Yikes!” She dropped it from sheer reflex, the heat vanished, and her fingers had no sign of injury. An illusion. A strong one.

“What happened?” Ryan demanded, staring at the shiny quill as if it might come to life. “You act like it bit you.”

She eyed the feather, not eager to repeat the experience. “Try touching it.”

His brows shot up.
“Carefully,” she added. “See if you get the same vivid sensation of heat.”

“Why am I always the guinea pig?” But he pulled out a second pair of gloves, crouched, and extended a tentative finger. “Nope. I feel nothing.” He picked it up. “What’s that tell you?”

“It has a defensive shield that reacts to magic.”

She gave a terse nod. “I couldn’t get past its shields to identify the magic user. Maybe the lab can do better.” She took off her gloves and stuffed them in a pocket. Ryan could carry the damned thing.

They headed back to the car. Ari kept a vigilant eye on the sky and trees around them, extending her senses to avoid a surprise attack. Although the nymph hadn’t died from the visible injuries of a crow’s attack, Ari believed they’d just seen the killer—or some form of the killer—and the cause of the nymph’s death was dark magic. 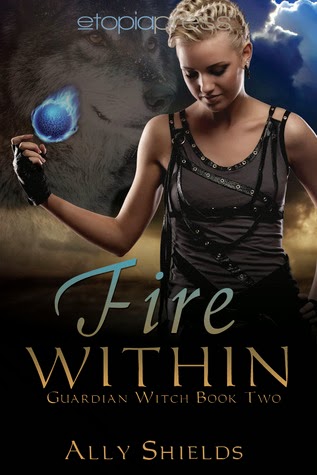 You can find Eternal Fires and the entire Guardian Witch series here: 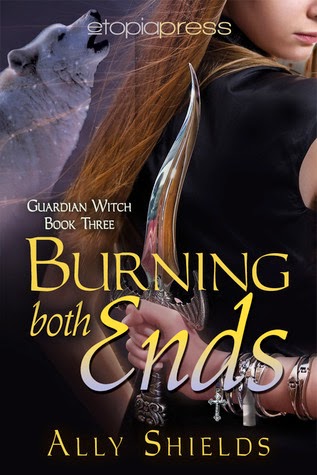 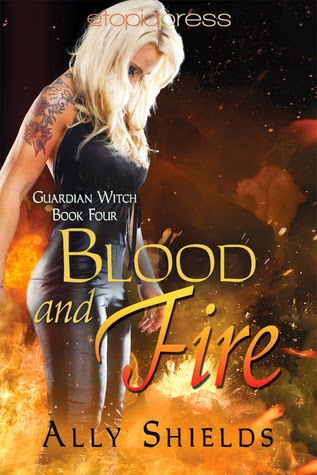 And here is the Trailer for Eternal Fires:

There will be more from Ally in Autumn-Winter of this year, with the release of novel II in the Elvenrude series - Cross Keys: Revelation 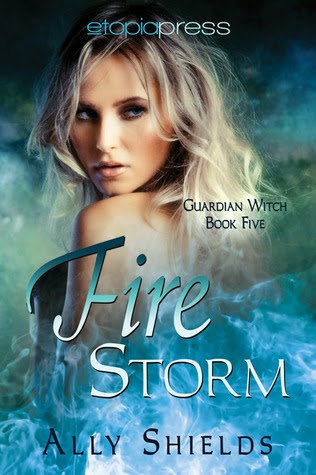 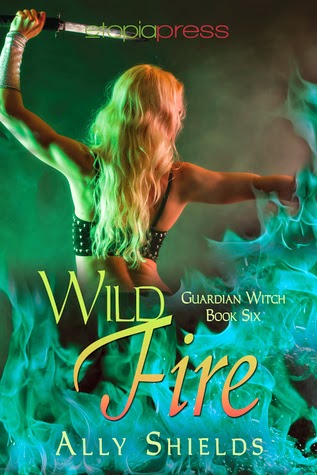 Posted by Catherine Cavendish at 10:16