If you were a witch, you had better pray you weren’t around in the 17th century and that your King wasn’t James I (James VI of Scotland). His hatred of - and determination to eradicate - witches knew no bounds. In truth, such a toxic atmosphere led to many false claims being made against people whose only crime had been to fall foul of someone vindictive enough to seek revenge in the most heinous way.

My novel, The Pendle Curse, is partly set against the history and subsequent trial of a group of Lancashire witches, but other similar - perhaps less well known – events took place at a number of locations throughout the country.

Less than one month before the Pendle Witches were hanged at Lancaster, and around 200 miles to the south, Northampton Castle’s Lent Assizes saw four women and one man hanged for witchcraft. At least seven others were spared, although the exact number remains debatable, as records differ. The condemned died at Abington Gallows, but what were their alleged crimes?

As at Lancaster, a whole group was accused, not just one person. The methods used to test the witches differed though. The Northamptonshire Witches were ‘dunked’. This is one of the earliest recorded instances where this cruel method was employed. The hapless accused was tied to a rope, rowed out to the middle of a river and then tossed over the side. The belief was that witches floated because they had renounced baptism or because they were lighter than good Christian men and women. Either way, so the theory went, if the victim sank, they were innocent. Needless to say, some ‘innocent’ people drowned. Others were pulled in, just in the nick of time and revived. They were, by every stretch of the imagination the lucky ones. 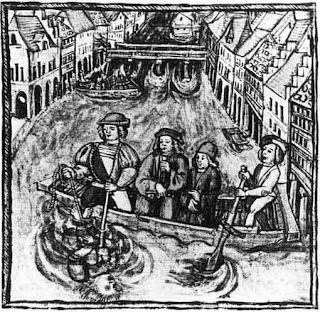 According to one account of the trials Agnes Browne, her daughter Joan Browne (or Vaughan), Jane Lucas, Alce Harrys, Catherine Gardiner and Alce Abbott were indicted for putting curses on Mistress Elizabeth Belcher and her brother, Master William Avery. Three women of the ‘Wilson family’ were also implicated. William Avery is said to have marched down to the prison cell and beaten up Agnes Browne, cutting open her eye and causing it to bleed. He did this because making a witch bleed was believed to lift the curse they had inflicted. The Belcher/Avery trials caused a major sensation at the time as the victims were well-born, but afflicted. William Avery seems to have been a determined character and he made some highly questionable – if imaginative – accusations. He claimed to have seen Harrys, Abbot and Gardiner travelling on a sow’s back. Two weeks before they were captured, Avery said he saw Agnes Brown, Catherine Gardiner, Jane Lucas also riding on a sow’s back to visit another old woman, regarded as a witch. 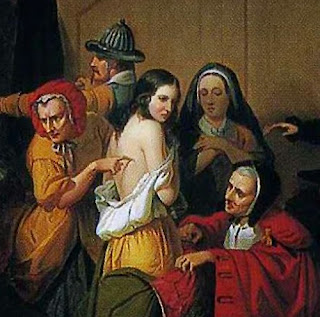 The other main account (The Witches of Northamptonshire, published in 1612), detailed the immoral lives of the accused, in sharp contrast to the godliness and spirituality of their victims. This time, other alleged witches were named, along with their supposed crimes. These included Arthur Bill, who was accused of bewitching Martha Aspine to death, Mary Barber, who apparently bewitched a man to death and harmed many cattle, and Helen Jenkenson, charged with bewitching a child to death. Jenkenson was searched for the infamous ‘witch’s mark’ – a mole or other blemish which, when poked with a sharp stick or ‘sticker’ failed to bleed. When such a mark was found – as it was on Helen Jenkenson – this was deemed proof positive that the accused was a witch. The mark would be where the devil’s imps would come to suck out the blood. 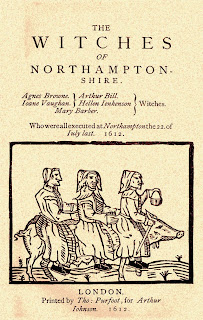 Those who hanged for their alleged crimes were: Arthur Bill, Mary Barber, Agnes Browne, Joan Browne and Helen Jenkenson. There is no evidence that the others were convicted or executed. There were other tragedies in connection with these trials. Arthur Bill’s parents were dunked and both floated, ‘proving’ them to be witches’ Rather than face a trial, they committed suicide.
Posted by Catherine Cavendish at 11:55