My new novella - Dark Avenging Angel -  will be published by Samhain on August 4th and is available for pre-order now at your favourite digital bookstore. Here are a few comments from some early reviewers:

"Gripping from the first pages, you’ll love this story and its satisfying twist of an ending." - Russell James, author of Q Island and Black Magic.


To give you a flavour of the story, here's the short blurb: 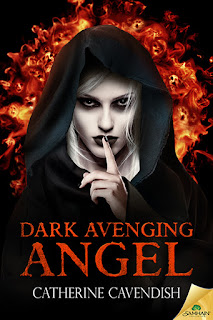 Now, here's an excerpt, from the beginning:

Fine for those lucky kids who could guarantee they would go home to parents who loved each other; to fathers who would be proud of their little girls and tell them how much they loved them and how beautiful they were, even when acne raised angry, red and yellow spots, marring any fledgling good looks.

I, on the other hand, would go home, heart in mouth, scared of what would happen when my father came in from work. At the scrape of his key, my mother tensed. She thought I didn’t notice, but she’d got that wrong. I noticed everything. I heard everything. The shouting, beatings, swearing—until I could take it no more, ran to the shelter of my bedroom and prayed he wouldn’t come in. Prayed that when it eventually went quiet downstairs, my mother would still be alive.

My father. I couldn’t call him Dad. Dad implies someone warm, loving, caring. Someone who makes their child feel secure and safe. Not someone who scares them every minute they’re around. This was the 1960s, but his attitude would have been more in tune with the 19th century.

“Put your toys away now, Jane. Your father will be home soon.” The nightly refrain from my mother as six o’clock rolled by and all traces of a child’s presence must be removed. I was sure he would have had me removed if he could. If I laughed too loud, a disapproving look and an impatient rustle of the newspaper followed. If I raised my voice?

“Can’t you keep that daughter of yours quiet? I’m trying to read.”

My mother didn’t need to respond. I would already have got the message and retreated to the relative safety of my bedroom. There I would dream my dreams. Mostly of how to escape this nightmare.


I’d read my bumper books of fairy tales from exotic lands. Spain. India. Magical places where princesses locked in towers were freed by handsome, brave princes on pure white stallions. I’d imagine myself dressed in a flowing robe of white and gold, rescued by a tall, handsome stranger with deep-brown eyes and strong arms. He’d swing me up behind him on his horse and we’d ride away from the prison where my evil father, the king, had imprisoned me all my life.

One day, I saw a photograph of a man just like that in an old photograph album my mother kept tucked away in the bureau drawer.

“Who is that nice man, Mummy?”

But Mum seemed uncomfortable answering my question. She almost snatched the album from me, and snuck it back into the drawer.

She caught me gazing at that picture a few more times when I was a child. Each time, I asked her who it was. Each time, she took the album and put it away. But she never forbade me from fishing it out again.

Taunting me seemed to be my father’s chief hobby. It happened on an almost-daily basis. Nine out of ten for a mental-arithmetic test would earn me one of his favorites; “You’re no good, plain Jane Powell,” he’d say, his mouth twisted in an ugly sneer. “Look at you. Go on. Look at yourself in the mirror.”

He’d grab my shoulders and twist me around so I had to look at my reflection, even though I hated to see myself. Short, nondescript mousy hair, unremarkable blue-gray eyes, pale, scared face.

“Plain face, plain mind. You’re nothing. Nothing. You’ll never amount to anything. When your friends have all been to university and got themselves good careers, you’ll be selling toothpaste to them in the market!” He would throw me to one side. “Get out of my sight. I don’t want to look at you.”

I’d race out of the room, in case he changed his mind.

“You shouldn’t speak to her like that,” Mum would say.

Children without siblings get used to their own company. I suppose it makes us more self-reliant. I’ve never needed crowds of people around me, and living alone never caused me any real grief. Yes, I’ve known loneliness, but I would far rather be alone than in the sort of marriage my mother endured for thirty years.

Most of the time growing up, I wasn’t completely alone. When I wasn’t dreaming of heroic rescues, I played with my dolls. I had four of them. Each with their own personalities, or so I imagined. Audrey, the sophisticated one with her short, curly, shiny, brown hair and vivid-blue-painted eyes. I dressed her in silky remnants of my mother’s old petticoats. Molly and Sally were baby dolls. They usually sat quietly, observing the proceedings in their pretty pink dresses, little, white bonnets and hand-knitted bootees.

My out-and-out favorite was the one I saved my pocket-money pennies for, week after week, until the glorious day when Sindy became mine. Sindy with her bright, pouty smile and long blonde hair, cascading over her shoulders, as mine was never allowed to do. I dressed her in tight blue jeans and a stripy top, or a pretty cotton dress. On her feet, white stilettos or dark-blue sneakers. I didn’t have much pocket money, so Mum made little clothes for her. Frilly blouses, a blue-velvet skirt, even a fancy green spring coat, all handsewn or run up on her machine from scraps of cloth left over from her dressmaking.

I wrote little plays for my dolls. Stories that echoed my dreams. The other dolls would play the minor roles but the star of the show was always Sindy. My poor mother endured hours of Princess Sindy and the Castle of Adventure, Lady Sindy and the Case of the Missing Locket, Sindy’s Spanish Adventure…The list ran on and on. The dining room table provided the stage. I created scenery from old cereal boxes, decorated with pictures cut out of magazines or drawn by me. Sadly, my creativity didn’t stretch to any artistic talent. But, while I made Sindy the star, she lived out my ambitions. One day I would be a great actress or a famous playwright.

Over a couple of years, Sindy’s daytime wardrobe grew and I styled her hair every which way to suit her look for that day. She was my pride and joy. No other doll came close. But, lovely as she was, no one could match my cat.

Sukie. I can still remember the day I was handed a Clarks shoebox punctured full of holes so the little kitten inside could breathe. On the bus going home, I nursed the box proudly on my knee. Muffled squeaks issued from within and passengers kept turning round to see what was going on. All the while, I sported the biggest grin, as my six-year-old self declared I’d never be lonely or bored ever again.

In the kitchen, Mum took the box from me, laid it gently on the floor and removed the lid. A little, jet-black scrap of fur with huge, blue eyes blinked at the daylight, opened her pretty little mouth and squeaked. I scooped her up and cuddled her.

“I love her, Mummy. She’s beautiful.”

Mum smiled and tickled the little, furry chin. “Yes, she is, and I expect right now she’s rather hungry.”

Sukie and I grew ever closer. Her blue eyes gradually changed to a vivid green, shining like emeralds against her glossy, black fur. Until she grew too big, she used to curl up and sleep in one of my slippers.

My father tolerated her presence, until she grew enough to jump up on his car in the garage one night and left muddy pawprints along the bonnet.

He thumped the dining room table. The cutlery jangled. “You’d better stop that bloody cat. If I see any more of her handiwork, I’ll get rid of her. Do you understand?”

I ran from the dining room in floods of tears, found nine-month-old Sukie and scooped her up, ignoring her protesting meow. I held her close and whispered in her ear, “Please don’t jump on the car, Sukie. He says he’ll get rid of you and I can’t do without you. Please, Sukie. Please.” My tears drenched her fur. I’m sure she wasn’t too happy about that, but she let me. And she purred. Her pink tongue licked my fingers, its roughness and rhythmic strokes soothing me, until we cuddled up together on the settee and fell asleep.

Mum said he wouldn’t carry out his threat, even though this scene was repeated ad nauseam over the years. Trouble was, I always believed he would.

But there was yet another reason I wasn’t completely alone.

Out on August 4th - available for pre-order now:
Samhain Publishing