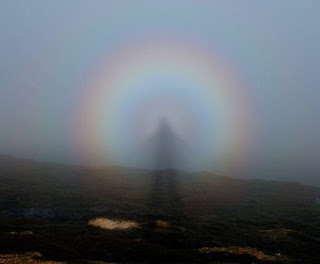 Now here’s a curiosity – one which is well documented, features frequently in classic works such as Goethe’s Faust and, above all, is true.

It is a natural phenomenon known as the Brocken Spectre, named after the mountain on which it was first observed back in the eighteenth century.

The Brocken, or Blocksberg, is the highest peak in the densely forested and often eerie Harz mountain range in German. For up to 300 days per year it is shrouded in mist and fog and it is the prevailing weather conditions that cause the spooky phenomenon known as the Brocken Spectre. It got its name when, according to legend, a hiker was startled by a ghostly apparition looming out of the mist. He was so terrified by what he saw that he fell to his death. Now local folklore has it that if you see the spectre, a death will surely occur – and it could be yours. So do think carefully before deciding to go searching for ghosts on the Blocksberg. 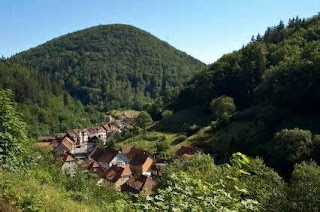 If I haven’t deterred you, then you will have to ensure that the weather conditions are right.  You need a foggy, misty early morning or early evening. Climb the 3747 feet to the summit and then look down into the mist. Make sure the sun is behind you. Your shadow will appear distorted – your legs too long and your head too small, in a sort of triangular shape. You certainly won’t recognise yourself. Not only that, it won’t be in the right place. The white mist will alter your depth of perception and the shape will appear to be opposite you, rather than next to you. You will feel you are staring at a ghost. Owing to defraction, your shadow will appear to have a rainbow halo. Again this is the action of the sun behind you and the millions of tiny water droplets in the mist.

Blocksberg isn’t the only place you can see such phenomena but it is probably the best documented. In Shelley’s  Scenes from the Faust of Goethe, he writes:

"Now to the Brocken the witches go;


The mighty multitude here may be seen


Gathering, wizard and witch, below"


Authors and poets from Bram Stoker to Coleridge, Lewis Carroll, Thomas de Quincey and Thomas Pynchon have all drawn inspiration from this fascinating mountain.


The Harz Mountains form the magical, and frequently scary, backdrop to many famous children’s stories. The Brothers Grimm set Hansel and Gretel there. Snow White, Cinderella and a host of myths, legends and folklore abound.

So next time you go climbing in the mist and fog, with the sun behind you, remember the ghost opposite you is just your shadow...probably. 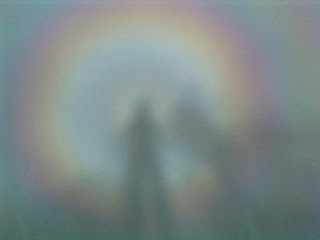 Posted by Catherine Cavendish at 13:24