Out Now! The Devil's Serenade 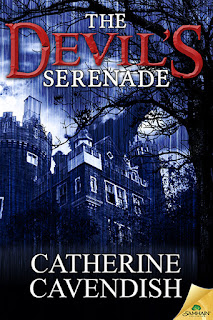 “Madeleine Chambers of Hargest House” has a certain grandeur to it. But as Maddie enters the Gothic mansion she inherited from her aunt, she wonders if its walls remember what she’s blocked out of the summer she turned sixteen.

She’s barely settled in before a series of bizarre events drive her to question her sanity. Aunt Charlotte’s favorite song shouldn’t echo down the halls. The roots of a faraway willow shouldn’t reach into the cellar. And there definitely shouldn’t be a child skipping from room to room.

As the barriers in her mind begin to crumble, Maddie recalls the long-ago summer she looked into the face of evil. Now, she faces something worse. The mansion’s long-dead builder, who has unfinished business—and a demon that hungers for her very soul.

"Catherine’s writing is intelligent and brings an elegance back to horror that has been missing for years. The Devil’s Serenade is a true testament to her body of work." Beneath The Underground

“An excellent, back-to-the-basics haunted house story - a Gothic horror which doesn’t get too mired in on itself. The Devil’s Serenade builds a sense of dread, with genuine scares, right up to the climax.” —Daniel G. Keohane, Bram Stoker nominated author of Solomon’s Grave

I absolutely love Cat's books. Hers are very different from what you may be used to. If you've never read one of her books before, I highly recommend you start here” – Cat After Dark

"This is a haunted house tale as full of memories and regrets as it is demons and spirits. More importantly, it's a story where the house itself is part of the story." - Beauty in Ruins

"I would recommend this book to anyone who is looking for a good creepy story." - FangFreakin-tastic Reviews


"Fans of gothic horror are sure to eat this book up" - Examiner.com


“There's plenty of twists, turns, and doubt… horror and ghost-loving fans will really like to sink into this one.”- The Reader’s Hollow

"The Devil’s Serenade is a great, new haunted house tale that is packed with tension and has a few fantastic surprises along the way." - 2 Book Lovers' Reviews

"A great book to curl up with on a stormy night." - Horror Maiden's Book Reviews

I took to Charlie the instant he turned up in answer to my phone call for help. There was something comfortable and reassuring about him that inspired my confidence. He seemed familiar somehow, even though we’d only just met, and I sensed that if Charlie told me something, I could rely on his honesty. In the past couple of hours, I’d learned that he was fifty, divorced ten years earlier, and had lived in Priory St. Michael all his life.

He picked up his toolbox off the floor by the cellar door. “If you want to know anything about anything in this town, ask me. Chances are I’ll be able to point you in the right direction. I’m sure you’ll like it here. We have our drama, but mostly it’s a nice, peaceful sort of place.” He picked his keys up off the table. “Miss Grant was your aunt, you say?”

I nodded. “Yes. I used to spend my summers with her when I was a child. I loved this old house. So many rooms to play in. A perfect playground for a child…"

A memory stirred. Hairs prickled on the back of my neck. In the summer of my sixteenth year, something happened at Hargest House. Something that existed just out of reach in my mind. Something bad. Whatever it was, my mind blocked it out. I never saw Aunt Charlotte again and never returned to the house. Until now.

Of that last summer, no memories remained. Only gaps and that inexplicable feeling of unease I now experienced afresh. I became conscious of Charlie watching me with a slightly curious expression. I cleared my throat and continued.

“You and I are a similar age, so maybe I saw you round the town back then.”

“Quite probably.” Charlie seemed about to say something else, but changed his mind. When he spoke again I was sure it wasn’t what he had planned to say. “I did a little work for Miss Grant now and again. A partial rewiring, a new strip light in the kitchen, that sort of thing. She kept very much to herself. A very private lady.” He frowned. “Right, Mrs. Chambers, I’ll see you on Monday. Eight thirty sharp and you’ll be having lashings of hot water before you know where you are.”

“That’ll be super, Charlie. I’m grateful for my power shower but I do love a good wallow in a nice, deep bath. That poor old boiler isn’t up to the job. Besides, I really can’t be doing with oil. And do call me Maddie, please. ‘Mrs. Chambers’ makes me think you’re talking to my ex-mother-in-law.” I raised my eyes heavenward and he laughed.

“You assume correctly. She was an absolute witch. Hated me for marrying her son and hated me even more when we split up. I couldn’t win.”

He opened the front door and hesitated. “Have you been down to your cellar?”

I shook my head. I’d been too busy sorting out the rooms on the first two floors to venture any higher or lower in this vast house. “What’s the problem?” A horrific thought hit me. “Oh God, don’t tell me I’ve got rats or mice or…something.”An image of a horde of cockroaches flashed into my mind, munching their way through anything they could get their disgusting little jaws into.

I blinked. “Roots? What—tree roots or something?”

He nodded. “Yes, you’ve got some growing down there. You may want to get them dealt with.”

“You mean they’re coming in under the foundation? But there’s no tree close enough for that.”

“Nevertheless you have tree roots growing in your cellar. It’s certainly odd. I mean, the cellar’s a bit damp, but not excessively so.” He hesitated, then shook his head.

His wasn’t the sort of news I wanted to hear. “Thanks for letting me know,” I said as I followed him out to his van. He left with a smile and a wave.

After he’d gone, I stayed outside, looking out over the grounds. In front of me, fifty or so yards away, stood a strangely distorted weeping willow. It had been struck by lightning many years earlier and had grown bent and twisted. The branches hung low and weaved their way across the grass in such a fashion that, as a child, I had christened it “the tentacle tree”. From my angle, I couldn’t even see the lowest one where I used to sit when I was a child. I had loved that tree, but… Some trace of a hidden memory unnerved me. I had no idea what it was and my mind wasn’t letting me anywhere near it, but my hands began to shake. I told myself I was being stupid and turned back into the kitchen.

Once inside, I marched over to the cellar door and opened it. It gave a protesting squeak and I made a mental note to oil the hinges later. Right now I was curious to see this tree phenomenon that so intrigued Charlie.

I had always been possessed of an acute sense of smell. My mother used to comment on it. From what she and everyone else told me over the years, I could detect almost anything way before it reached anyone else’s nostrils. With a pleasant aroma, this was a blessing; with a bad one, a curse. Now, my nose wrinkled at the pungent earthy smell—a sharp contrast with the warm, fresh kitchen. I flicked the light switch and a single, weak bulb illuminated part of the expanse stretching out at the bottom of the flight of wooden stairs. I grasped the banister and began my descent. The farther down I went, the stronger the smell of soil, which had taken on a peaty tinge.

I cried out, staggered backward and fell against the stairs. The flashlight clattered to the floor and went out. Only the overhead bulb provided any light, and it didn’t reach this darkest corner.

Something rustled. I struggled to my feet, grabbed the torch and ran up the stairs. I slammed the door shut and locked it, leaned against it and tried to slow down my breathing. A marathon runner couldn’t have panted more.


Special launch price only $3.15 (ebook) or $10.49 (paperback) from the publisher's website:
Samhain Publishing

I am on tour, with a different spooky guest post each time. Just click Tour Schedule to find out where I have been and where I am going!