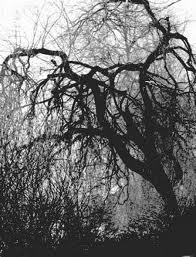 My new novel – The Devil’s Serenade – features a most extraordinary willow tree, inspired by a real example of the species which grows (quite impossibly) by the river, near my home in North Wales.

I say ‘impossibly’ because this tree does not perform like your typical weeping willow. In fact it doesn’t ‘weep’ at all. It twists, turns, its branches jutting out at odd, serpentine angles. At some stage in its history, it appears to have been struck by lightning and, at certain times of the year, judging by the charred remains of burned out candles and various items of assorted bric-a-brac, appears to be the focus of some kind of ritual. 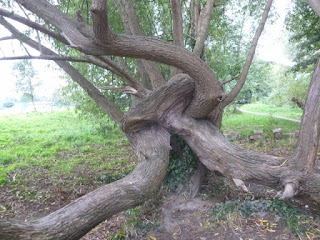 But then, willow trees have long been the subject of myth and legend from the stories of Orpheus in the Underworld to the present day. Willows are said to possess a heart. Maybe that can explain the strange sensation I experienced one day when I sat on one of the trailing branches of the willow near my home. Although there was no wind, the branch beneath me rippled. It felt as if it was breathing. I have only experienced this particular sensation once, but that was quite enough to inspire a story.

Who knows what provided the inspiration for the poignant tale of the Willow Wife which has passed into Japanese culture and tradition.

The story goes that, once upon a time, the inhabitants of a Japanese village were much enamoured of the magnificent and beautiful willow tree growing in the centre of their community. It not only charmed the people it also seemed to protect them from the worst of the winter elements. 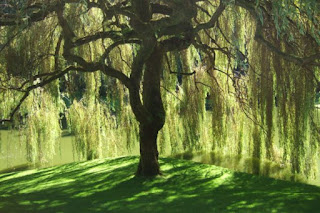 A young boy named Hiroshi could see the tree every time he looked out of his bedroom window. When he walked to school, he would often stop and breathe in its scent, marveling at its grace and beauty. Then some years later it seemed the willow’s life might be threatened. The elders of the village decided to build a bridge over the river and started to fell trees for their timber. Hiroshi was scared the willow might be next in line to face the axemen. He pleaded for it to be saved and even offered the men money so they would not cut it down. They agreed it should be spared.

Hiroshi now became more and more attached to the tree. He would whisper his secrets to it, stand underneath it and give thanks for all of nature around him. As he grew older, so he became more convinced than ever that the tree understood him and, in its own way, healed his soul.

One day, he came upon a beautiful young woman standing under the tree where he normally stood to say his prayers. 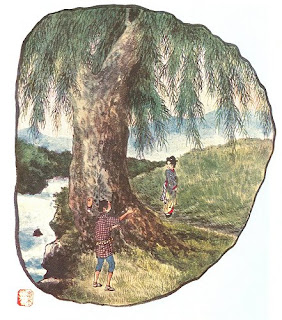 “Are you waiting for someone?” he asked.

She smiled. “He will not come.”

“But how terrible. What kind of man would not meet such a fair woman? How sad it is when love is not returned.”

“He loves me,” the woman said.

Hiroshi was now confused. “But why does he not come to you?”

Again, she smiled at him. “His heart has always been here, under the willow tree.”

To his dismay, the woman then disappeared. But she returned the next night and they talked – about the stars, the beauty of the peaceful night and the place where they were standing. The woman told Hiroshi that her name was Kaori, but she would say no more about her family or who she was.

They continued to meet, night after night, until Hiroshi was sure he had fallen in love with this mysterious and beautiful woman. He asked her to marry him and she agreed – with one proviso. “Don’t ask me anything about my past.”

Hiroshi readily agreed. He loved her as much as he loved the willow. Nothing else mattered.

The following year, now married, the couple had a soon they name Daiki. Their happiness shone around them. They were always smiling and laughing. But, as always, such happiness could not last.

The emperor of Japan wanted to build a temple to Kwannon, the goddess of mercy. He needed timber from all the villages – even the most sacred trees. The elders of the village decreed that the lovely willow should be their offering. None could compare with it. “It will be our most sacred gift for the most sacred of temples,” they said. 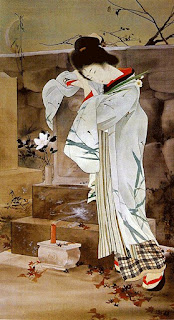 The next morning, Hiroshi and Kaori woke to the sound of the axes chopping down their beloved tree. In bed, beside Hiroshi Kaori shuddered. “My love, my hair is falling from my body. My limbs are shattering!”

Outside, a loud crash. The tree was felled. In that moment, Kaori disappeared, leaving Hiroshi holding a single branch of golden willow leaves.

Too late, Hiroshi realized his beloved wife was really the spirit of the willow.

For the rest of their lives, Hiroshi and Daiki continued to give thanks for their beautiful, gentle wife and mother.

Posted by Catherine Cavendish at 14:28