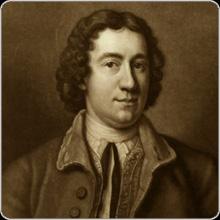 Novelist L.P. Hartley coined the famous saying, “The past is a foreign country. They do things differently there.” There is a lot of truth in that – not least in the case of Sir Francis Dashwood, 11th Baron Despancer, who somehow managed to be Chancellor of the Exchequer from 1762-63 despite being a notorious rake and founder of the infamous Hellfire Club. They certainly did things differently in the 18th century! However much we may despise the antics of some of today’s politicians, their misdemeanours pale into insignificance when presented alongside those of Sir Francis. 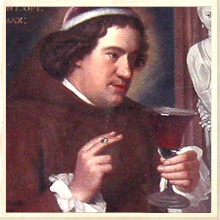 Born in 1708, Francis Dashwood was educated at Eton and became elected Tory MP for New Romney in 1741 – a position he held for 20 years though what he did for the good people of New Romney is up for debate.  Over the years he was also Postmaster General, Treasurer of the Chamber and eventually Master of the Great Wardrobe (a largely symbolic post).

He spent his youth travelling across Europe and gaining a reputation for his outrageous behaviour. In Russia, he impersonated Charles XII of Sweden and made an attempt to seduce the Tsarina. He also managed to get himself expelled from the Papal States. 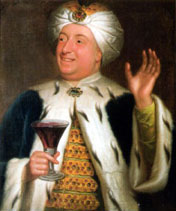 By 1736, he was a leading light of the Dilettante Society – whose name has passed into the English language to describe a person who dabbles in the arts without any serious commitment. And members of the Dilettante Society certainly did a lot of dabbling. Horace Walpole described it as "a club for which the nominal qualification is having been to Italy, and the real one, being drunk.” Aside from the frivolities though, Dashwood did manage to get himself elected as a Fellow of the Royal Society and also involved himself in charitable work – an increasingly fashionable pursuit amongst the upper classes – as vice president of the Foundling Hospital and also of the General Medical Asylum.
But it is for his involvement in the Hell-Fire Club that Sir Francis Dashwood’s name has passed into history, and fable. There had already been one short-lived Hellfire Club, begun in 1719 by the Duke of Wharton, but disbanded two years later. In the 1730s, another Hellfire Club was started at the George and Vulture pub and Dashwood was one of its active members. While in Italy, he had become enthralled by the practice of naming clubs in direct opposition to the principles for which they stood. As a result, he decided that it would be fun to create a burlesque society dedicated to St Francis. Here frivolity, gaiety, debauchery and plenty of alcohol would fuel the proceedings. Irony in its most extreme form. 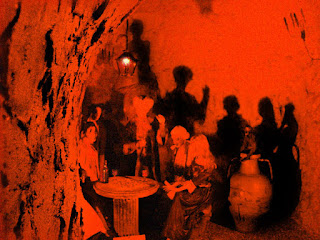 This resulted in the creation of the Brotherhood of St Francis, otherwise known as the Order of the Knights of West Wycombe who held their first –somewhat lacklustre – meeting at Dashwood’s home, West Wycombe Park.  Dashwood searched for a more ironic location for their ‘meetings’ and found it at nearby Medmenham Abbey, whereupon the group renamed themselves the Monks of Medmenham. This former Cistercian Abbey lay on the banks of the Thames in an idyllic setting. Dashwood rented it, renovated it and by 1755 the ‘monks’ had gained their more recognisable name of the Hell-Fire Club – not of their choosing, it would seem. This was a name imposed on them by their critics. 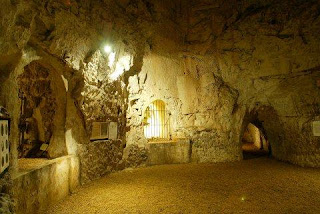 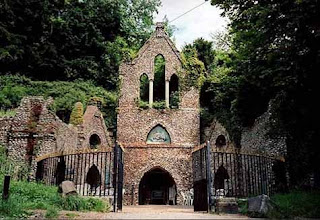 It would appear that Dashwood himself led in every possible way, shape and form. He was the High Priest of this band of debauched ‘Franciscans’ and performed ceremonies where he would celebrate heathen deities and conduct mock communions. It was rumoured that Black Masses took place and all manner of depraved and lewd behaviour, including the summoning of demons. 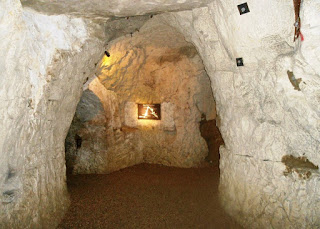 Between 1748 and 1754, Dashwood excavated and renovated ancient chalk caves at his home in West Wycombe and to achieve this, the anachronistic Dashwood created his own job creation scheme by employing far more labour than he actually needed. Paying the labourers one shilling per day would certainly have helped alleviate the sufferings caused by failed harvests. Another ‘good work’ of this irrepressible eccentric?

By 1754, work was completed. It was said that so much evil was summoned at the Society’s ‘meetings’ that an attempt to build a church near the entrance to the caves saw it demolished overnight by some unseen force. A spirit voice told the local priest where to build the church. He followed its instruction and St Lawrence’s Church is still at the designated site.

The ‘brothers’ held meetings in the caves during the 1750s and 1760s. Drinking, feasting, gambling, music, singing, carousing and sex with their mistresses seems to have been the order of the day for many members, but equally, Dashwood had long held a fascination for ancient and pagan religions such as druidism and the Celtic and Roman traditions. He and others appear to have wanted to revive these and worship of these deities, such as the Bona Dea (more familiar us now as The Goddess of the Wiccan religion) may well have ensued. 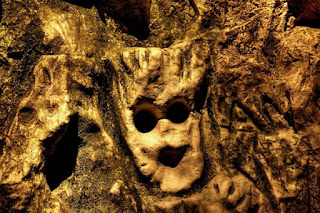 Dashwood did himself no favours by his behaviour. The satirist Charles Churchill called him ‘a disgrace to manhood’ and it was said he corrupted young men and boys. Yet through all this, he continued to conduct a political career and, in 1762, was created Chancellor of the Exchequer. He didn’t remain in post long. His budget speech was incomprehensible. He appeared to have no grasp of financial matters and it soon became clear he would have to make way for a more capable man. In order to save him too much embarrassment, he was created Master of the Great Wardrobe – a purely ceremonial role. - where he could do no damage.

For all his notoriety, the death of his uncle ensured that Dashwood was created 11th Baron Despencer – the premier baron in England - and in 1770, he was created joint Postmaster General. 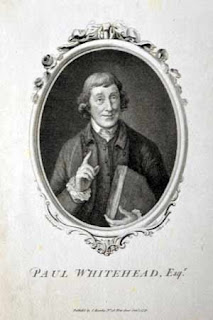 What of the Hellfire Caves now? They are open to the public and play host to a range of activities – including ghost hunts. The site is now regarded as one of the most haunted in Britain. A former steward –Paul Whitehead – is believed to haunt the caves and ghostly sightings have been reported many times down the years. It is said he is searching for his heart. He left £50 to Dashwood so that, after his death, his heart would be placed in an urn in the caves. Dashwood honoured this, but around 150 years ago, his heart was stolen by an Australian soldier and has never been returned, although the urn remains. Apparently the restless spirit is dressed in eighteenth century fashion and causes poltergeist activity.

An even more commonly seen phantom is that of poor, murdered chambermaid, Sukie, who worked at the nearby pub. She had ideas well above her station and desired only to marry a wealthy gentleman (she doesn’t seem to have been particularly bothered who he might be.) Eventually, she got her wish and a wealthy local man proposed to her. Naturally, she accepted, One evening, a note arrived for her purporting to come from her fiancé, asking her to meet him at the caves so they could elope. She put on her wedding dress and made her way down at dead of night. But poor Sukie had been duped. Local boys – angry at her repeated rebuttals – had sent it. A fight ensued, stones were thrown and Sukie was felled by a blow to her head. She died in the passages. 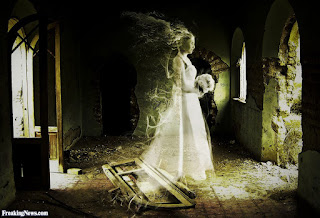 
Needless to say, such a reputedly haunted location as the Hell-Fire Caves would not be missed by Yvette Fielding and Britain’s Most Haunted team, who mounted a night vigil there. Well worth watching: