A Feast of Horror at Grimmfest 2016 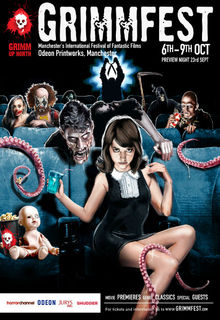 October 6th-9th 2016 and Grimm Up North presented their annual Grimmfest at the Odeon Printworks Cinema in Manchester.  And what an event it turned out to be. A delicious feast of horrific delights enough to satisfy the cravings of any horror fan – covering a dizzying array of sub-genres.

This year, the eclectic selection followed a series of themes. The Southern Gothic strand included the opening film Let Me Make You A Martyr (featuring Marilyn Manson as you have never seen him before, giving a chilling performance as a cold-blooded, cynical killer). My Father Die and Trash Fire completed this trio. Of these, my personal favourite was My Father Die. Directed by Sean Brosnan (son of Pierce), this was essentially a revenge movie, very dark, savage – the story of a boy (Asher) with an abusive father who brutally assaulted him, leaving him deaf, as he viciously murdered Asher's beloved elder brother.  The father went to prison, but now, 21 years later, he is out, free to terrorise what is left of his family . But Asher has other plans… 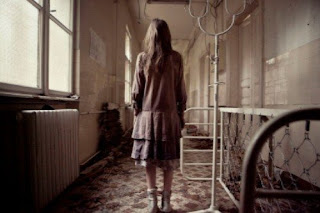 A Nordic Horror strand provided two excellent films – Villmark Asylum and What We Become. I loved Villmark Asylum, with its bleak location and fabulously creepy derelict building. This is the story of five Norwegian contract workers whose job it is to check a massive 312 room former sanitorium for hazardous waste, prior to its planned demolition.  They are searching for asbestos and mercury, but what they find is far more dangerous and it becomes a battle for survival.

What We Become is a Danish film where the Johansson family suddenly find their home and neighbourhood cordoned off in the wake of an alleged virus outbreak. But when the authorities impose a total curfew and start shooting anyone who disobeys it, they begin to wonder just what sort of an outbreak this is. Two excellent films, right up my own particular dark alley. 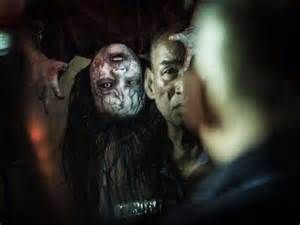 Asian Extreme featured Train to Busan and the superb Taiwanese film, The Tag-Along. This centred on an Asian myth of a ‘Hungry Ghost’ that originates in the mountains and possesses its victims by feeding on their guilty secrets while stealing their souls. Should the unfortunate victim speak the full name of a living being, the ghost will move on to possess that person and, as a result, this takes the ghost – in the form of a little girl - down to the town. This film is arguably my favourite of the entire festival. Shown late at night, the story stayed with me. Eerie, scary and brilliantly executed.

Two films centering on Bad Relationships were the exceptionally gory, Pet, and Broken. This latter film’s storyline concerns the relationship between a former rock musician and his reluctant care worker. The musician has been left tetraplegic as a result of an accident, while spaced out on drugs. This - at times - harrowing, and constantly dark film weaves an increasingly involved tale. An essentially self-centred and unpleasant main character reveals layers and depth of personality that actually made me feel sorry for him (well, almost). The care worker is left to perform the most intimate of tasks for her charge, as well as being expected to wait on his hanger-on so-called friends. The mounting relationship between the two central characters left me completely unprepared for the ending, and I like that. I love a twist I was not expecting. Great film. 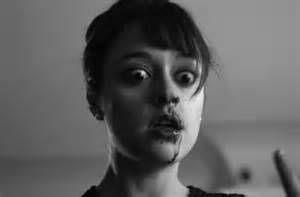 The seemingly timeless Darling, shot in stark black and white, and Observance, formed a Paranoia Can Annoy Ya (their description) strand. Gripping psychological horror. Again, these films had great plots, acting, production and twisted endings. Observance especially kept you guessing. What was really going on here? Who was watching who? Excellent. 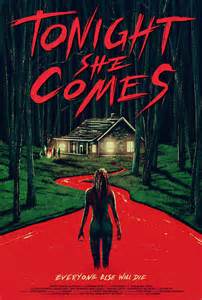 An Offbeat strand included Director’s Cut, featuring the multi-talented Penn Jillette. His illusionist partner, Teller, played a cameo role. This was horror comedy. Off the wall and good fun. Tonight She Comes and Another Evil completed this strand. The first of these began as a seemingly familiar tale set in an isolated backwoods area and involving four young people. The two girls are searching for their missing friend who should have been waiting for them at her cabin. The first young man is a mailman who simply wants to drop off a letter. His friend is out in the woods. This film featured plenty of gore, humour, scares and was anything but predictable. The talented young director, Mark Stuertz, joined the audience for a Q and A afterwards and was as entertaining as his film.


Another Evil begins as a haunted house movie where a topflight exorcist is brought in to rid the house of a couple of ghostly presences. But, in this film, evil comes in a number of guises. Some guests just don’t want to leave… 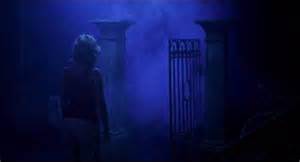 The Unseen, and Beyond the Gates formed the Independent strand. In Beyond the Gates, the familiar plotline of two estranged brothers coming to empty their deceased father’s video store, is given a few unexpected twists. The pair find an old board game called Beyond the Gates. They decide to play it. This was not their wisest decision… The Unseen has some extremely poignant moments in among some unnerving and disturbing horror when a man, down on his luck, finds he is slowly disappearing. He hasn’t seen his daughter since she was a small child. The special effects and prostheses were excellent and this film provided a great opening to Day Two’s proceedings. Other films included New British Genre Gems – The Rezort (a post-apocalyptic nightmare) and The Chamber (claustrophobic horror set in an underwater submersible), a classic given a remastering – The Burning -  and sci-fi horror The Rift, starring Ken Foree who also joined the audience via the wonders of modern technology, live from Los Angeles for an after-show Q and A.


Also included was a collection of short films ranging from ten minutes to just under half an hour. For me, notable inclusions here were the surprisingly moving and unusual zombie film, A Father’s Day, and an intriguing, scary tale called Little Boy Blue.

Thirty films, Q and As with actors, directors and writers, a hub where T shirts, posters, books, DVDs and a variety of gory, fun gifts, plus a demonstration by the incredibly  talented horror makeup artist, Shaune Harrison made for four days of horrifically fine entertainment.


With many thanks to Festival Co-Director, Simeon Halligan, who hosted the event for Grimm Up North and to everyone who worked so hard to make everything run so smoothly It takes a lot of effort to appear swan-like. These organisers were swans in full sail!

Posted by Catherine Cavendish at 15:56

Email ThisBlogThis!Share to TwitterShare to FacebookShare to Pinterest
Labels: #Grimmfest #GrimmUpNorth #horror #films #MarilynManson, Another Evil, Beyond the Gates, Broken, My Father Die, The Tag-Along