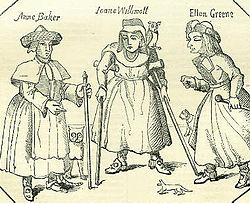 My novel – The Pendle Curse – has some of its roots in a true story. In August 1612, ten men and women were convicted, in Lancaster, England, of crimes related to witchcraft and subsequently hanged on Gallows Hill. They became known to history as the Pendle Witches.

But they were not alone. 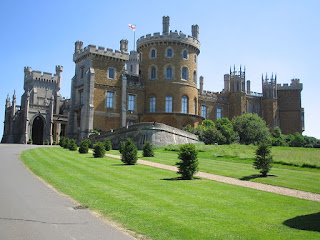 At Belvoir Castle, near Grantham, in Lincolnshire, in the early part of the 17th century, the Earl and Countess of Rutland employed a mother – Joan Flower - and her two daughters, Philippa and Margaret. All three were known to be well versed in the art of herbal remedies. The Rutlands were in urgent need of extra domestic help as a visit from King James I was expected. The Flower family didn’t last long there though. They were dismissed amid rumours of theft and other misdemeanours. 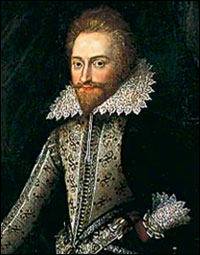 Almost immediately after the women left, the Earl and Countess fell ill of vomiting and convulsions. Then their children suffered similarly. Their heir – Henry – died a few weeks later and was buried on 26th September 1613. Francis also fell ill but, thankfully, their daughter, Katherine, recovered.

By 1616, the thirst for purging witches had reached fever pitch, and nine women were hanged in Leicestershire for crimes committed involving the Black Arts. They had been accused of bewitching a young boy who subsequently died. These witches owned animals, known as ‘familiars’, said to assist them in their devil’s work, casting spells and other mischief. The Flower women also possessed a cat – called Rutterkin – who was to play a significant role in subsequent events. 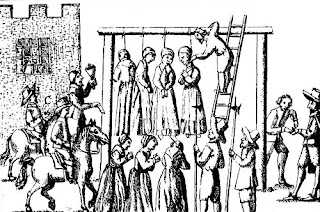 The Rutlands’ second son, Francis, died and, in 1618, a full five years after Henry had passed away, the Flower women were arrested on charges relating to witchcraft in connection with his death. All protested their innocence, but were taken away to be ‘examined’. Following this, they were sent to Lincoln Gaol, where they were due to be incarcerated until their trial. On the way there, Joan Flower, who did not attend church, requested a piece of bread, in lieu of Eucharist. She said it would prove her innocence, as surely no true witch would be able to eat something so pure and holy. She took a bite, choked on it and died.

Needless to say, the women undoubtedly suffered horrific torture. That era was notorious for the creativity employed in extracting confessions from people. A visit to any crime museum will reveal implements such as the boot (which crushed feet and ankles), the scold’s bridle (complete with spikes to pierce the victim’s mouth), needles to pierce nails and pincers to pull those same nails out. Food and sleep deprivation and beatings with chains added to the sadistic and horrific menu. 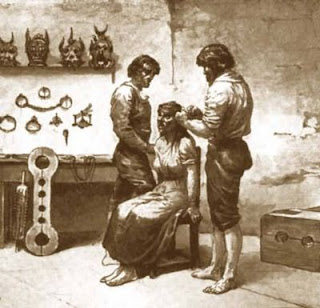 Margaret Flower eventually accused her - now deceased - mother of witchcraft. Philippa admitted she was a witch – and accused her mother and Margaret. The sisters both confessed to consorting with ‘familiar spirits’ to assist them in their schemes.  And this is where their mother’s cat – Rutterkin- came in. The sisters said they stole the glove of Henry, the Rutlands’ heir and gave it to Joan. She dipped it in boiling water, stroked it along Rutterkin’s back and chanted incantations which caused the boy to fall ill. To ensure the Earl and Countess couldn’t have any more children and, therefore, remained without an heir, the women had cast a spell, using feathers from the Earl’s bed and a pair of gloves which they boiled and then mixed with blood. 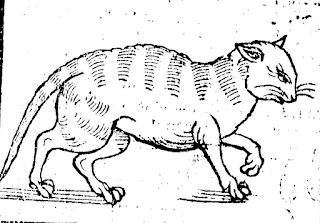 The two sisters also accused others of being witches. Anne Baker, Joan Willimot and Ellen Greene were arrested, ‘examined’ and then, unsurprisingly, ‘confessed’ to practicing witchcraft.

Margaret and Philippa Flower were tried and found guilty. They were hanged in Lincoln Castle on 11th March 1619.

The Earl and Countess remained convinced - to their dying days - that their eldest son had been killed by witchcraft. On their monument, as part of the inscription, are these words:

There has been recent speculation that Joan Flower and her daughters were framed by none other than the infamous George Villiers, 1st Duke of Buckingham and favourite of King James I. The story goes that Villiers had designs on the Rutlands’ daughter, Katherine. He planned to marry her and - with both her brothers dead - inherit the title. He achieved his ambition to marry the girl on 16th May 1620, much to her father’s disapproval. 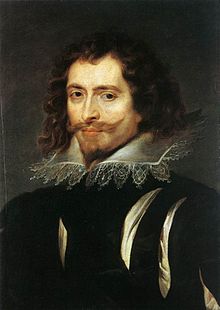 Fortunately this unpleasant and arrogant man did not achieve his ultimate ambition. He did not become the next Earl of Rutland. He died in 1628, four years before his father in law. At least some justice prevailed in this sorry saga! 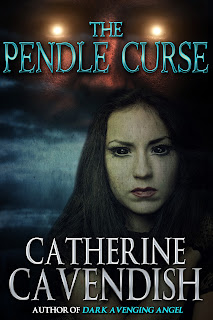 Here’s a short extract from the beginning:

His spirit soared within him and flew up into the storm-clad sky as blackness descended and the rain became a tempest.

He flew. Lost in a maelstrom of swirling mists. Somewhere a baby cried until its sobs became distorted, tortured roars. Beyond, a black void loomed. He saw Alizon’s spirit just ahead and tried to call out to her, but his voice couldn’t reach her.

Beside him, another spirit cried out. His mother. He flinched at her screams before they were drowned in the mass—that terrible parody of some hideous child.

The blackness metamorphosed. An amorphous shape formed as his eyes struggled to see with their new vision—the gift of death. Small baby limbs flailed towards him. Eyes of fire flashed as a toothless mouth opened. Screeching, roaring and demanding to be fed. Demanding its mother.

His spirit reached out for his lover. Tried to pull her back. “Alizon!”

She turned anguished eyes to him. “It calls to me.”

He recognized it instantly. The blazing fire. The devil child. That cursed infant had come for them.

Again he reached out with arms that no longer felt connected to him, but he was powerless to stop Alizon being swept away, deep into the abomination’s maw.

“No!” His cry reverberated around him—a wail of anguish in a sea of torment.

Then…silence. Only he remained, drifting in swirling gray mists of time.

From somewhere, he heard an echo…

You can buy The Pendle Curse here:

Amazon
Barnes and Noble
Posted by Catherine Cavendish at 00:30