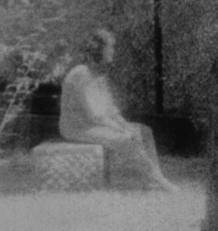 Many stories abound of haunted houses of all kinds – from ordinary terraced dwellings in unremarkable streets through to grand mansions and palaces. I have written about quite a few of them myself.

But, engaged as I currently am on writing a novel that includes a frighteningly haunted garden, I was interested to discover where such places exist in real life. It turns out there are many of them, all over the world.

So for today’s haunted voyage of discovery, let’s visit historic Aberglasney House and Gardens in Llangathen near Carmarthen in Wales.

The house itself is positioned at the grand end of the scale and the area it stands in has known some gruesome battles, including one particularly bloody conflict in 1257. Even the surrounding fields have names which hark back to their violent past – Ca Tranc (Field of Vengeance) and Cae’r Ochain (Groaning Field).

It is believed that a certain Bishop Rudd acquired the estate of Aberglasney in around 1600, during the final years of the reign of Elizabeth I. For the next 110 y ears, the house stayed in his family before being sold to the Dyer family in 1710, followed by another sale in 1798. This pattern continued until troops occupied it during World War II. Ten years after the war ended, the estate was split up and the house and home farm were bought by a local man called David Charles. Sadly he couldn’t maintain the building and the place was left to fall into decay and dereliction.
Then, it was bought in 1995 and is being fully restored to its former glory by the Aberglasney Restoration Trust.

As far as the house’s ghosts are concerned, life appears to have gone on largely ignored by them. They had other agendas and there are reputed to be between 90 and 130 spectral beings.

In the 1630s, the first of a series of reports of ghostly happenings tells of a maid who saw five candles floating around, apparently of their own accord, in a newly plastered ‘blue room’. The next day, five maidservants were found dead in their beds. A stove left burning to dry the plaster had asphyxiated them while they slept.

To this day, this is one of the most active rooms in the house as far as ghostly sightings and experiences are concerned. Visitors have been touched, felt someone brushing past them and have generally been spooked by their time in that place. In the 1930s, a worker, clearing ivy from the window of that room almost fell off his ladder. He swore he saw five girls in old fashioned dress peering out at him. The house was empty and derelict at the time. Could it be that the ghosts of the five dead maidservants had made an appearance? 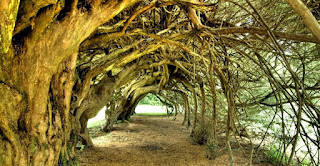 An East India Company surgeon, Thomas Phillips, who owned the house in 1803, has appeared to gardeners, servants and tradespeople over the years and has become more active recently when tour guides have heard his ghostly footsteps.

Another ghostly encounter has been with a young servant girl who stands in the corner of the basement, apparently cooking.

With ongoing restoration work, it seems the ghosts of Aberglasney have much to occupy them.

So, there is plenty to interest the ghost hunter inside the house, but what of outside?

Aberglasney boasts some of the finest gardens in the country and a visit there in summer is well worth it. The Cloister Garden, Ninfarium, Asiatic Garden, Sunken Garden, Kitchen Garden, Bishop Rudd’s Garden and more are all planted with an abundance of beauty. 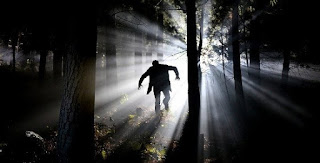 And then we come to Pigeon House Wood, at the rear of the building. It too is beautifully designed. Planted with deciduous trees, it offers a peaceful walk. But as visitors descend the earthen path, some have experienced an increasing sense of unease which intensifies until at the edge of the wood, it morphs into sudden fear and an icy coldness. So often was this reported that a reputable medium was consulted in 1999. She reported that a fugitive, on the run, had been chased through this wood and was shot, right at the point where those affected by the phenomenon had felt it most. Evidently meeting such a violent and sudden end released his emotions which were absorbed by the earth around him.

I have included some haunted gardens in my books so far – Linden Manor being one. It is a theme I am drawn to and, right now I am returning to it. Watch this space… 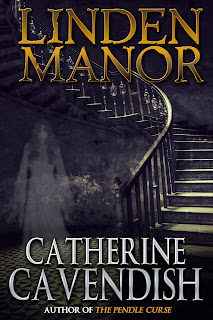 You can find out more about the glorious Aberglasney estate here

Posted by Catherine Cavendish at 16:14