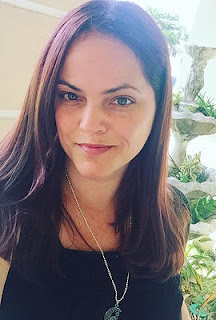 I am delighted to welcome author Gaby Triana to my blog today. Gaby is the author of both horror and YA stories and her latest - the first in her Haunted Florida series - is called Island of Bones. Here she talks about her writing, her hometown and why she would make an excellent kitchen witch...


C.C: First of all, congratulations on Island of Bones. I loved it. The atmosphere, suspense, ghosts, secrets and the mystery were a brilliant combination and made for a pretty scary ride. It had a distinct ring of authenticity about it so I am guessing you needed to do a fair bit of research, am I right and how did you go about it?

GT: Thanks, Cat! Well, I live in Miami, Florida, only a 3-hour drive from Key West, so much of that authenticity comes from being a local. As for the tidbits about 1950s Key West and Havana, Cuba, my parents are Cuban exiles who came to Miami in the early 60s, so they lent some first-hand experience to the narrative from their own memories. 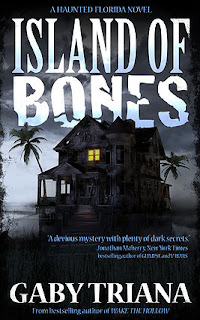 C.C. You have a second in the Haunted Florida series coming out in September, can you tell us a little about that?

GT: The second book is RIVER OF GHOSTS, and it comes out September 26th. This one is about a Miccosukee woman living on the reservation in the Everglades (a few miles from where I live) who gives airboat rides and can’t help but add an element of the paranormal to her tales. This goes against her culture but she is drawn to all things supernatural, so when a TV production crew offers her a large sum of money to escort them to an abandoned haunted depot in the middle of the Everglades, she takes them, against her better judgment. Needless to say, all hell breaks loose. 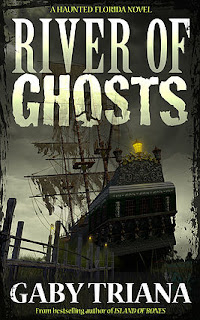 C.C. When did you pen your first work, and what was it?

GT: My very first published work was a young adult novel called BACKSTAGE PASS about the 16-year-old daughter of a famous rock musician attending a public Miami high school incognito. The book came out in 2004 as part of a 2-book deal with HarperCollins, and for the next 17 years, I wrote and published in the young adult genre. Meanwhile, I was wishing I could write paranormal/horror for adults. J

C.C. When did you first become interested in horror and what drew you to it?

GT: That’s the funny thing. Horror was and has always been my first true love, not young adult books. I became a horror fan as a child listening to narrated tales of Edgar Allan Poe on my little blue and white record player back in the 70s. From there, I became easily drawn to the works of Stephen King, because of King’s unabashed inclusion of young characters in his stories. Pet Sematary had a significant child character. It had several kids that were my age when I first read it (at 12), The Shining had young Danny Torrance in it, and Carrie was a teen coming of age. Whether he meant to attract kid readers or not, he did because of his genuine kid POV narratives.

C.C. What is your writing process?

GT: It’s evolved over the years. I used to outline the whole thing out, chapter by chapter, because I didn’t trust myself to know what I was doing and didn’t want to waste time writing something that would go nowhere. Nowadays, I’ll outline the first few chapters, just to get me started, fill in the ending, but leave the middle entirely open, except for the occasional plot point. This gives me a road map for direction but with the freedom to go in anywhere with the novel I choose, as long as I end up where I planned. Only once has the story diverted from that ending in a way that benefited the plot. 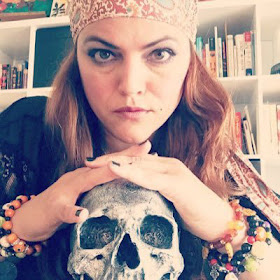 C.C. What was your route to publication?

GT: I was an elementary school teacher for 10 years first, but I always used to write scary stories in high school and college, so writing has always been a part of me. I began writing stories for my 4th-5th grade students, and one became my first manuscript, still unpublished called Freddie and the Biltmore Ghost, about a 12-year-old and her friends who investigate an abandoned hotel in Coral Gables, Florida. From there, I published BACKSTAGE PASS and 6 other young adult novels over the next 17 years: CUBANITA, THE TEMPTRESS FOUR, RIDING THE UNIVERSE, SUMMER OF YESTERDAY (about abandoned water park, River Country, in Disney World), WAKE THE HOLLOW, and CAKESPELL.

C.C. Who are your greatest writing influences and why?

GT: Judy Blume was a huge influence for me growing up, because I appreciated the honesty in her stories. She wasn’t afraid of writing real kids, real teens into her books who were all going through real situations and emotions, and I knew, when I became a YA novelist, that I wanted to write the same way. Also, in high school, I was introduced to William Faulkner who wrote using a stream of consciousness style, and most of my first novels all adopted a similar style. I loved the immediacy of first person, present tense, the way thoughts just popped up and flowed right as they were being formed. It made me feel like I was right in the characters’ minds. 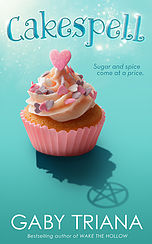 C.C. You have said that your ambition is to live ‘a witchy life in the forests of New England’. What sort of witch would you be?

GT: Ha! I have always wanted to move out of Miami, not because I don’t love it—it’s my hometown—but to experience somewhere new. I’ve never lived in a place that experiences the four seasons, so I would probably be a green witch or a kitchen witch, since I associate cooking, baking, and seasonal foods with the way I’m feeling at different times of year. I can see myself growing pumpkins and squash in my little garden then harvesting them and making delicious butternut squash soups, all while infusing them with magical goodness that makes my family happy. J

C.C. When are you at your happiest?

GT: When my kids are home. When they’re away, I feel incomplete and borderline depressed. But when they’re home, and the house is abuzz with that lovely sound of teen boys chattering, playing, and when the dinner table is filled with their bodies and hungry mouths, and it’s not just me and my husband, I have more young men to cook for, it makes me feel happy. I love being a mom. J

C.C. Have you ever been on a ghost hunt (If so, what happened? If not, would you go on one?)

GT: I have never been on an official ghost hunt, though I’ve always wanted to. I’ve been on historical ghost tours, and I’ve broken into several abandoned locations, but never experienced anything ghostly at those spots. I have, however, experienced ghostly phenomena at my father’s house here in Miami. Disembodied voices in the middle of the night, glowing blue lights that appeared and disappeared in the middle of the air for no reason, and lights turning on and off by themselves. Also, another time I complained that my hairbrush was missing, and an hour later, it was sitting right where it should have been when I knew for a fact it hadn’t been there an hour before, and nobody was home to move it. I’ve also seen and felt presences while meditating.

C.C. Finally, tell us something most people who know you might not know. We promise not to tell! 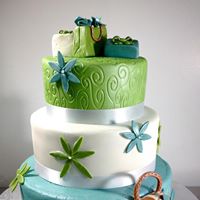 C.C. Thank you so much for joining me, Gaby. Now how can we follow you?

GT: THANKS! It was fun being here, Cat!