Werewolves Work Among Us


I have often described Stuart West's writing as my guilty pleasure because whether it's horror-with-humour, crime or the manic antics of Zach and Zora, he never ceases to entertain me and put a smile on my face.

Now he's back with a fabulous take on the werewolf trope. In fact, these are werewolves as you have never seen them before - and that's before we get into goat yoga. I'll leave it to Stuart to explain: 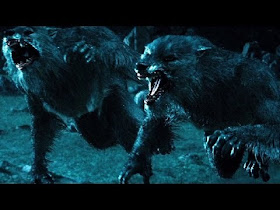 Okay, that guy. See him? The guy three cubicles over? The one who kinda reeks, is pretty hairy, snaps at others like they’ve snatched away a choice soup bone?

Chances are he’s a werewolf.

Werewolves are around us. It’s no lie, I have proof. Three out of four dentists suggest the same thing and they would know, having to dig fingers into lycanthropes’ canine teeth on a regular basis. Is it any wonder dentists have the highest suicide rate amongst professionals? It’s a colossally, huge burden they shoulder.

Dr. Larry Veranicus, PhD standard bearer of Lycanthropy for the European Establishment of Werewolfography (aka, “EEW”), explains it best. “People largely assume werewolves are the thing of dreams, big-eyed monsters with claws out to here,” says Veranicus, eyes bugged and clawing the air. “Little do they realize, werewolves aren’t a myth. Rather the most inconspicuous person you know could possibly suffer from lycanthropy.” Dr. Veranicus sucks on a pipe, emitting a wheezing, lazy bagpipe sound. “Once, when I worked in fruit basket sales, I noted a gentleman, one work station over, had extraordinarily hairy knuckles." 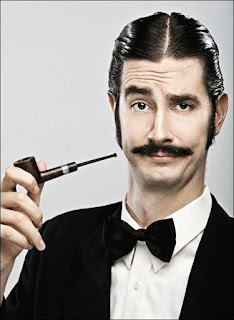 I asked him, I said, "Chuck, do you suffer from hypertrichosis?"

Strangely, Chuck ignored me and proceeded to seal the deal on a particularly voluminous fruit basket sale.

But the proof is in the pudding, as they say. Undoubtedly, Chuck was a werewolf. Call them what you will, no sugar-coating and no prejudice:  wolf-man (or woman, if you will, lycanthropy is not a sexist disease), loup-garou, lycanthrope, shape shifter, or a talcum-toed Talbot. Soon, I discovered just how prevalent werewolves are in our so-called civilized society. Lately, it’s become much more disturbing as werewolves have now fully indoctrinated into society, building their own power clique, steadily becoming the rulers of the world.
I questioned Dr. Veranicus on the proof to his theory. Pointing to a pie chart, he explained, “This largest slice?” He tapped a blood-red quarter of the pie diagram. “This represents werewolves living amongst us.”

“What does the green smudge in the corner represent?” I asked.

“Yesterday’s lunch. As you can see, I’ve fully documented the rise of…”

While, Dr. Veranicus opened my eyes to the world around me, the thorough journalist that I am, I sought further corroboration. 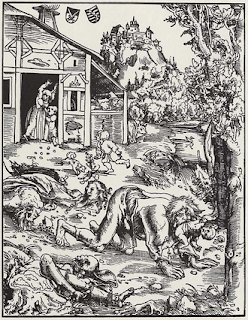 Fact! Gaius Petronius Arbiter, a Roman courtier during the reign of Nero, is one of the earliest perpetuators of the truth regarding lycanthropy. Hey, the (widely accepted) author of The Satyricon wouldn’t lie, now would he?

Fact! The belief in werewolves perpetuated alongside the notorious witch hunts throughout Europe in the 18th Century. And since when have religious zealots been wrong?

Fact! The term lycanthropy, referring both to the ability to transform oneself into a wolf and to the act of so doing, comes from ancient Greece, widely renowned for being a hotbed of smarty-pants fellows.

Fact! Today’s corporate cut-throat cult of personality thrives on werewolves and vice-versa. It’s not a well-known fact (at least until now!) that werewolves constitute the largest percentage of the hard-charging, social-stabbing corporate climbers we’re all painfully familiar with. It’s a jungle of concrete and glass tailor-made for the beasts in humanity.

Werewolves work among us! And I’m here to tell you the truth in my shocking true undercover expose, Corporate Wolf.

Here, let my publisher take care of the blurbiness: 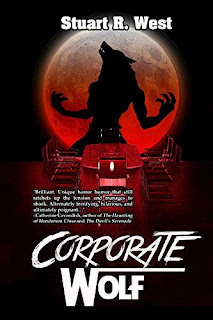 If you can't run with the big dogs…

It was supposed to be a corporate retreat and a series of morale-boosting exercises. It was a weekend Shawn Biltmore nearly didn't survive.

There was something else playing in the woods that night, something other than a bunch of corporate drones with paintball guns.

And it had chosen Shawn as its new chew toy.

The local authorities chalked it up to a bear attack.

So did the doctors.

Shawn knew the truth, however, as much as he wanted to deny it.

But when one of his coworkers is viciously killed, Shawn must face the truth…

He's a killer who needs to be put down.

Okay, the book’s all gussied up as horror fiction, but it’s not. Not really. This is a work of non-fiction. So, lock your doors. Don’t ask for a raise. Go get a manual labor job. I understand there aren’t a whole lot of werewolves in the service industry. 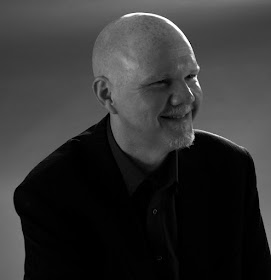 Stuart R. West is a lifelong resident of Kansas, which he considers both a curse and a blessing. It's a curse because...well, it's Kansas. But it's great because...well, it's Kansas. Lots of cool, strange and creepy things happen in the Midwest, and Stuart takes advantage of them in his books. Call it "Kansas Noir." Stuart writes thrillers, horror and mysteries usually tinged with humor, both for adult and young adult audiences.

Stuart spent 25 years in the corporate sector where he first encountered werewolves until he dropped out to pursue writing. Alas, the industry being what it is, Stuart’s now forced to reenter the lycanthropic corporate sector.

If you're still reading this, you may as well head on over to Stuart's blog at:

You can track down Stuart's Corporate Wolf here:
Amazon
Barnes and Noble
Kobo