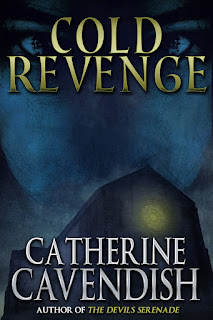 Some dinner invitations are best ignored...

For no apparent reason, Nadine, Maggie, Gary, and Nick are invited to dinner at the lavish home of top fashion writer, Erin Dartford. But why has she invited them? Why doesn't she want her guests to mingle? And just what is it about the mysterious Erin that makes them want to run for their lives? Little do they know that as they prepare to eat their first course, an evil as old as mankind is about to be unleashed. And revenge really is a dish best served cold...

Excerpt:
Nadine felt Paul’s eyes burning into her, and she couldn’t look at him. He seemed to want an explanation for her protracted absence, but what could she tell him? After she had shot out of that bathroom, she had leaned, panting against the wall, trying to calm herself, desperately telling herself that she had imagined that voice. Yet Julie’s Lancashire accent was so distinctive. As long as she lived, Nadine knew she would never forget it or the events of that awful night. The last night she had seen Julie alive.
How could she explain the mist that had descended in that tapestry-walled passageway, or the shapes that started to emerge? How could she explain the awful smell of burning and the lost minutes when she must have fainted?
She needed to eat something. That was all.
But … She had starved herself many times before and never once hallucinated. She looked around at the other couples. This was certainly a strange dinner party. Apart from chatting to Erin, no one seemed to be mingling. The only other person in the room she recognized was Maggie O’Donnell, that writer whose books were virtually the only ones she read, and then only on long plane journeys. From time to time, she caught furtive glances from another guest, and she began to realize that she wasn’t the only one who felt uneasy tonight.
“Come on, Nadine, snap out of it. Try some of these hors d’oeuvres. I don’t know what’s in them, but they are very tasty.” Paul handed her a tiny canapé.
She took a small bite and grimaced. “Oh God, Paul, it’s vile. It’s so bitter. What the hell has she put in here?”
“What are you talking about? I’ve had one. They’re gorgeous. A kind of curried chicken.”
She thrust it back at him. “Whatever that is, it is not curried chicken.”
His quizzical expression remained until he sniffed at and popped the offending morsel in his mouth. “Exactly the same as the one I had. Delicious,” he said, swallowing and wiping his hands on a small linen napkin handed to him by a passing waiter. “Honestly, Nadine, I think you’re losing it today.”
She glared at him, opened her mouth to say something cutting but decided against it. Not here. Not now.
“This is weird,” she said, watching Erin speak to one of the two liveried waiters. “Have you wondered what we are all doing here? I mean, there’s no atmosphere, apart from a little piped Muzak in the background. No one is mingling, and our hostess doesn’t seem inclined to encourage it anyway. Everyone looks wary.”
“Perhaps they’re all waiting for someone to make the first move. Maybe our Miss Dartford isn’t the hostess type. Maybe she invites a collection of people and sits back to watch what happens. Who knows? Come on, I am much more interested in what happened to you while you were away all that time. Did you meet the resident ghost?”
“Paul, how long have we been together? As a couple, I mean.”
“About eighteen months. Why?”
“And in that time, have you ever known me to behave in an irrational way?”
He laughed. “Do you really want me to answer that one?”
“No, I’m being serious. I know I get a bit premenstrual sometimes—”
“Not to mention the stressing out when your hair won’t sit right or your latest designer dress doesn’t hang the way you think it should.”
“You know what I’m getting at. I’m not one to imagine voices in my head or see … Oh, I don’t know what I saw. But something in this
house doesn’t feel right and something about our hostess doesn’t gel either.”
“Oh come on, Nadine.” He sounded exasperated.
She was about to tell him to forget it when Erin Dartford’s shrill voice called above the muted conversation. “Ladies and gentlemen. Dinner is served, if you would all like to follow me.”
The four couples filed in two by two in total silence. It’s almost like going to a funeral, Nadine thought. But why? She caught Maggie O’Donnell’s eye fleetingly before the writer looked away, apparently searching for her name card on the table.
“Please be seated, everyone.” Again Nadine noticed how Erin’s smile never moved beyond her slightly upturned lips. Her eyes were everywhere, not missing one single move.
Nadine shivered and found her place, between Maggie’s husband and another man she didn’t know. In front of her was her favorite starter, Parma ham wrapped around slices of melon and chunks of fresh peach. She saw that,
In front of each guest was a different dish and, by their reactions, each person was being served their favorite cold starter. Opposite her, sitting between Maggie and a very pretty blonde woman, Paul caught her eye and pointed at his plate of caviar and smoked salmon. His favorite. He smiled and nodded at her dish. Nadine managed to return his smile but the fear that had been haunting her since they’d arrived knotted itself tighter in her stomach.
She turned to Maggie’s husband and was about to ask him how he reckoned Erin could have known so much about her guests’ tastes in food, when their hostess tapped her wine glass.
“Ladies and gentlemen, I hope you enjoy your meal. However, as is the way with these things, I am quite sure some of you will enjoy it more than others.”
“What a curious thing to say.” Nadine realized she had spoken out loud. Neither of her neighbors seemed to have noticed but, judging by the way Paul was staring at her as she raised her fork to her mouth, it appeared he had. He wore a triumphant expression and she didn’t know why.
She stuck her fork into a chunk of juicy peach and put it into her mouth.
Her world exploded.
Cold Revenge is available here:
Amazon
Barnes and Noble