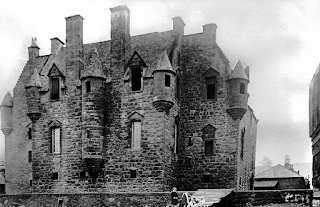 In 2004 a young couple, Wendy and Iain McGinnes, chose the 15th century fortified Newark Castle in Port Glasgow, Strathclyde, Scotland as the perfect venue for their wedding. The day was everything they could have wished for but, when they got the wedding photographs back, they found an extra guest had turned up. One who was not on their invitation list. In fact, one who wasn’t even alive.

A blonde woman dressed in red, stared out of a castle window, apparently watching the photographs being taken outside. Wendy returned to the castle to try and find out more about the identity of the shadowy figure and discovered she was not alone in having encountered her.

In fact there are frequent reports of a blonde haired lady in red haunting a room called the Steward’s Chamber and she has been photographed on more than one occasion. Staff at the castle told Wendy McGinnes that they close off that part of the castle during weddings and special events so it would be most unlikely that the figure at the window was of this world.

On further investigation, Wendy discovered that it was indeed the Steward’s Chamber from where the ghost had peered out at them. But who was she? 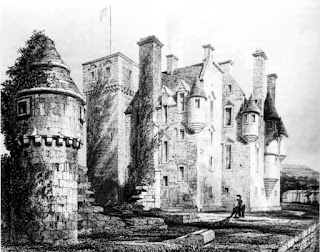 Firstly a little background. Newark Castle stands impressively on the shores of the mighty River Clyde and most of what we see today is down to the work of one man – Sir Patrick Maxwell who lived in the 16th century although the castle was originally constructed a century earlier by an ancestor of his. Maxwell added greatly to the majesty of the building but, apart from his grand building schemes, he was not the sort of man anyone would want their daughter to marry. He was a murderer and a serial wife beater. He murdered neighbours including two members of the Montgomery family of Skelmoorlie, and even some of his own relatives – including another Patrick Maxwell, this one of Stanely.

But his own wife bore the brunt of his cruelty – for 44 years during which time she bore him 16 children.  The former Lady Margaret Crawford alleged he attacked her with a sword and kept her locked in her bedchamber for six months with only bread and water for sustenance. When one of her sons and his wife attempted to care for her as she lay recovering from the sword attack, Maxwell had them thrown out of the house. 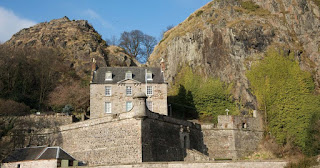 Things were so bad that even her mother in law attempted to intervene, lodging a complaint about her son’s behaviour with the Privy Council. It did no good. Added to the beatings and other violence she suffered, it is hardly surprising that one day, when she managed to escape, she fled across the Clyde to Dumbarton. It was here she died in poverty. Her husband was never made to face any charges. Some were pending, but he died before he could be called to account.

It is believed that it is the ghost of the tragic Lady Margaret that haunts the castle. She, it seems, is the Red Lady. This poor, mistreated soul cannot find rest and remains trapped in the place which during her life must have felt like a prison.


Newark Castle has been in the care of the state since 1909 and is today administered by Historic Environment Scotland . You can visit between April and October and wander its tower, rooms and corridors – and maybe say a little prayer for the repose of the soul of the Red Lady of Newark.

Posted by Catherine Cavendish at 15:10