The Ghosts of Newsham Park Hospital

My latest novel – In Darkness, Shadows Breathe – spends a significant amount of time in the frighteningly haunted Royal and Waverley Hospital whose walls conceal many dark secrets. Although a fairly modern hospital, my creation is built on land formerly occupied by a hospital, asylum and workhouse and is fairly typical in this. Many of today’s hospitals had multiple functions in their past – or are built on the foundations of earlier institutions whose practices would not be considered appropriate in this day and age.

Liverpool’s Newsham Park Hospital shares this murky heritage. Situated not far from the city centre, this crumbling and derelict building once housed an orphanage, hospital wards, a Bell Tower, an attic lined with 18 punishment cupboards where children who misbehaved would be incarcerated alone in the pitch dark, a schoolhouse, mortuary, nurses’ accommodation and chapel. Built in 1869, it variously served as an Orphanage, Psychiatric Hospital and finally an Old People’s Home before closing and being finally abandoned in 1992 when it quickly fell into disrepair. Plans to redevelop it into flats fell through, owing to local opposition, but, since then, stories began to circulate. Strange ghostly phenomena were reported. It wasn’t long before word got around and numerous haunted event companies began organising night time vigils and trips around its desolate corridors which are still littered with broken beds, commodes, wheelchairs, peeling walls and tons of rubbish and detritus – a kind of decrepit Marie Celeste of the medical world.


One of these event companies is Haunted Happenings. Newsham Park is a regular venue for them, and Philip Barron is one of their most experienced ghost hunters and guides. In more than twenty trips around the former hospital, he had witnessed his fair share of the unusual and unexplained and become accustomed to the many individual different experiences members of the same party might report But, on one fateful night, something happened that he had no way of explaining. It all started when, at the beginning of the all-night vigil, the group posed for the obligatory photograph.

The vigil passed off spookily as usual. Everyone had a great time and went home satisfied.

The next morning, Philip uploaded the photograph – again, as usual. What happened next wasn’t usual. The photograph quickly went viral. There were all the smiling, happy faces. The problem was there was one too many smiling faces. No one – and I mean no one – remembered the additional member of the group, a smiling girl. She wasn’t on the tour, well, not officially anyway. Maybe she had somehow sneaked in, and gained entry for free. Except...the simple fact was, she lacked substance somehow. The team tried to find a logical explanation and failed. Equally no one else has come up with one either. It remains one of the many mysteries of the stubbornly haunted Newsham Park Hospital.

Maybe she’s one of the former orphans, or a nurse from its psychiatric hospital days – maybe a patient. Whoever she is, she doesn’t seem too upset by being there.

The mystery ghost joins an ever-expanding collection of phenomena that includes: mischievous poltergeist activity such as workmen’s tools being moved and objects being disturbed when essential work was being carried out on the premises, the sighting of a small child in the attic along with voices heard coming from there, shadowy figures seen in one of the former wards, dragging noises coming from the former dining room, eerie screams and crying coming from the basement and other parts of the building. Then, there’s the overall heavy feeling of dread experienced by many visitors from the minute they cross the threshold. Only to be expected, I would have thought!

Want to see more? Here’s a clip to whet your appetite:
https://youtu.be/mC30MpVymkM 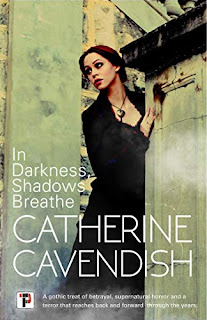 
Posted by Catherine Cavendish at 00:30 2 comments: