August Bank Holiday with its usual mix of sunshine and showers, coupled with one of the biggest weekends in the city's (horse) racing calendar, saw Waterstones welcome horror writer Steve Emmett to its York store yesterday (Saturday).

Steve was there to sign copies of his novel, Diavolino, which, following on the heels of a highly successful ebook, is now available in print. In case you haven't caught up with it yet, here's the blurb:

"The chance to build a dream home on a private island in Italy's most beautiful lake offers architect Tom Lupton the fresh start he's been yearning for. But when he arrives with his family on Diavolino, he finds the terrified locals dead set against his arrival. The island, whose very existence has been shrouded in secrecy for half a millennium, has a dark history that no one cares to remember, and as their opposition to Tom grows, so grows a brooding evil that will lead them to the very doors of hell..."


Author,Julia Kavan and I came along to add our support and were soon joined by Louise Cole from Firedance Books. It was the first time the four of us had met up (having enjoyed a 'virtual' friendship for over three years), so we had a great time. Even better, customers came along and bought the book! By the end of the day, with most of the stock sold, Steve pronounced the event a resounding success.

If you missed him there, you can still catch Steve in person at Booqfest
in Northampton on Sunday 16th September, where he will be delivering a talk on horror writing and reading extracts from his novel. 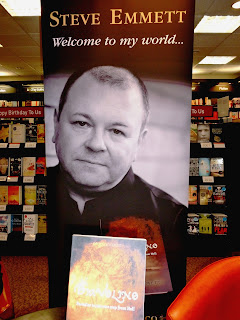 Ghostly Goings-On At The Golden Fleece

Julia and I, along with my longsuffering other half, Colin, met up at the multi-haunted Golden Fleece pub on the evening before Steve's booksigning. Typical of two writers, Julia and I were soon engaged in animated conversation while Colin - himself a published author (Accountancy in Banking)- amused himself with the pub's various eccentricities. Suddenly, he drew our attention to something a little odd.

Behind the bar, coffee mugs were suspended on inidividual hooks and, while the others remained static, one was swaying and continued to do so, never varying its rhythmical swing. Normally if you set a mug (or anything for that matter) swinging on a hook, it will slow down after a relatively short time and then stop. Not this mug. It just kept on...and on... and on. But nobody was touching it.

Then, to cap it all, a glass on an unattended table next to us suddenly crashed to the floor and smashed. We were the nearest people to it and were sitting about four feet away. It was, by now, fairly quiet in the bar and nobody had gone past for some time. OK, this is an ancient pub with uneven floors, so you might think it simply slid off the table. That makes sense, doesn't it? So, if we were to place another glass on the table, it too should slide, shouldn't it?  Except another customer, who had witnessed the whole thing, tried that repeatedly with a similar glass. It never moved...


Don't you just love a haunted pub that lives up to its hype?

Posted by Catherine Cavendish at 11:40 4 comments:

A Walk On The Dark Side - with Steve Emmett

Today, I am delighted to have Steve Emmett as my guest. Here he talks about his early influences, horror and the darker side of things...

When Catherine asked me to follow Aleister Crowley I took it as something of a compliment. Yes, he was pretty unsavoury and surely gave the expression ‘neighbour from hell’ an original meaning, but he is still a big name in the World of Darkness, and it is in that world that I have chosen to spend my career as a writer. But have I ever been tempted to dabble in the occult myself?

One of my early influences was the British author Dennis Wheatley. He wasn’t exactly a pillar of the community by all accounts. He picked up women in Richmond Park and was a terrible racist and right-winger (traits which sometimes deflect the reader from his stories). He also associated with rather iffy characters like Eric Gordon Tombe, a fraudster with whom Wheatley enjoyed the playboy life, quaffing champagne and, um, picking up women (there is a lovely line, I digress by the way, in Don Giovanni where the eponymous MC puts on his finery, climbs aboard his barge and sings ‘what a wonderful night for going out looking for girls’). Tombe eventually disappeared in suspicious circumstances, leaving Wheatley to draw on his exploits when the latter began his writing career.

‘No one should ever yield to a temptation to dabble in sorcery, even if only from curiosity or the search for a new thrill. It is impossible to involve oneself in black magic in any shape or form without becoming contaminated; it is impossible to approach it and not risk losing judgment and reason. I have personally investigated it and, speaking from experience, strongly advise no one to do likewise. There is nothing of true value to gain, and everything to lose. It does not matter how light-heartedly it may be entered into as an intriguing pastime, with a tempting spice of the forbidden, the penalty is the same.’

It is well-known that Wheatley continually gave the same warning, stressing that his own works were based on information gained from people such as Ahmed rather than his own personal experiences. And that has always been my position, drilled into me from an early age. I was sent to a Catholic school where talk of the supernatural was a sin (um, so what’s a virgin birth and rising from the dead?) and this is where my obsession – for I do think it is that – with horror and the dark side comes.
Witchcraft and devilry are the necessary and natural complements to organized religion. It has been so for over two thousand years. Organised religion is weakened, it may even cease to exist, without its dark cousin. Good and evil. The contrast of all contrasts. So when people ask how a nice person like me (you’ll have to take my word on that) can write about such bad things, that is the answer I give them. Good guys can write bad things because we experience the contrast. Hitler wrote horror, but it wasn’t fiction; neither did he see it as bad or horrific. Could he have written a decent horror novel? I doubt it.

When I wrote Diavolino I wanted to work with all these ingredients. Most of all I wanted to use the contrast between the beauty of the setting and the ugliness of the growing xenophobia to build the horror story. Naturally, Italy leaves the door wide open for the occult to raise its head alongside The Vatican. If you read Diavolino you will find goodness and beauty is everywhere, always on the surface to be seen. But evil lurks everywhere, ready to grab you when you least expect it.
Diavolino was my first novel (I have just completed my second and have two others part-complete).
If you live anywhere near York you might like to come along to Waterstones in that city on 25th August where I will be to sign copies purchased on the day.  A big ‘thank you’ to Kirstie Lount for making the event possible! If you’d like to hear me read from Diavolino and talk about my kind of horror, I’m appearing at the Northampton booQfest on 16th September. More details on my website.

Not long ago an older friend of mine revealed that his even older brother once struck up a friendship with the ageing Wheatley. My friend’s brother maintained that despite his warnings and claims of innocence, Wheatley had, in the name of ‘research’, got rather too close to the Black Art and ‘paid the penalty’. But I’m puzzled by one thing, and I will leave you with this thought. We all agree, do we not, that dabbling in the occult is dangerous? Even the master Rollo Ahmed warned us. So does this mean that the devil, demons, ghosts, supernatural evil are all real? Because if not, if they are purely fiction and superstition, how on earth could it possibly harm us if we did give in to curiosity – just once?
Sleep well!

(If you want to know more about Dennis Wheatley there is an excellent book by Phil Baker called The Devil is a Gentleman: ISBN 978-1907650321 published by Dedalus)

Posted by Catherine Cavendish at 10:27 12 comments: