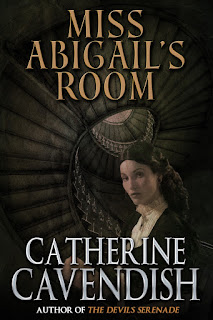 It wasn’t so much the blood on the floor that Becky minded. It was the way it kept coming back…
As the lowest ranking parlour maid at Stonefleet Hall, Becky gets all the dirtiest jobs. But the one she hates the most is cleaning Miss Abigail’s room. There’s a strange, empty smell to the place, and a feeling that nothing right or Christian resides there in the mistress’s absence. And then there’s the blood, the spot that comes back no matter often Becky scrubs it clean. Becky wishes she had somewhere else to go, but without means or a good recommendation from her household, there is nothing for her outside the only home she’s known for eighteen years. So when a sickening doll made of wax and feathers turns up, Becky’s dreams of freedom and green grass become even more distant. Until the staff members start to die.

A darning needle though the heart of the gruesome doll puts everyone at Stonefleet Hall at odds. The head parlour maid seems like someone else, the butler pretends nothing’s amiss, and everyone thinks Becky’s losing her mind. But when the shambling old lord of the manor looks at her, why does he scream as though he’s seen the hounds of hell?

"I enjoyed watching Becky try to unravel what was going on and I was surprised (in a creeped out way) by the things that happened around her. Having those around you pat you on the head and talk around you like you're not there is one of those things that gives me the deep down willies. It was horrible and scary and I liked it a lot.

Wiltshire, 1896
It wasn’t so much the blood on the floor that Becky minded, as the way it kept coming back.
That morning, as she did with monotonous regularity, she heaved her bucket up the steep, winding stone stairs to the turret room, muttering to herself. She panted as she stood at the top of the stairs and stared at the heavy oak door. A warm August sun streamed in through the turret windows in the east tower of the large eighteenth century country manor. Sweat beaded Becky’s brow, and she wiped her hand across her forehead, catching up a stray lock of mousy brown hair which she tucked, none too successfully, under her white housemaid’s cap.
Her heart beating a little too quickly, she took a deep breath and reached for the door handle, praying that, just once, she wouldn’t have to get down on her knees and scrub away the gruesome stain.
She turned the handle and pushed the door open, peering into the still, darkened bedroom. “’Ere goes.”
The room smelled of emptiness. Miss Abigail had been away for three months this time, but she would be back in a week or so. At least that was what the butler, Mr. Farnsworth, had told them all at breakfast.
Heaving another sigh, she tugged at the dark green damask curtains that hung on one wall of the semi-circular room and sunlight flooded in. Despite the summer warmth, Becky shivered. She hated this room. Its heavy atmosphere always left her depressed and gloomy.
Her view was uninterrupted for miles across Stonefleet Hall’s immaculate, velvet green lawns, over the trees to the rolling Wiltshire hills beyond. The bright sun against the deep azure sky made her squint, and she wished she didn’t have to turn around. But it had to be done.
“Oh Gawd! Not again.”
There on the floor to the left of the window, the familiar splash of red stained the parquet floor.
Hitching up her black skirt, she groaned as she lowered herself onto her knees, wincing at the pain of her Housemaid’s Knee. “I’m getting too bleedin’ old for this lark.”
Taking her rag, she sloshed it in the galvanized bucket, wringing it out before plopping it onto the floor and setting to her task.
Ten minutes later, she tossed the rag back into her bucket and sat back on her haunches, mopping sweat from her forehead with a grimy handkerchief. “Stay away this time, why can’tcha?” Becky’s joints creaked as she heaved herself upright, almost tripping as her boot caught on the hem of her skirt, ripping it. “Dammit! Now I’ll ’ave to get me needle and thread to it again. Gawd knows ’ow much more mending it can take.”
A sudden noise caught her attention. She gazed around the room, taking in the tidy double bed with its heavy white cotton bedspread, the wardrobe with its doors shut tight, and the mantelpiece covered in delicate china ornaments.
Becky hardly dared breathe. All she could hear was her own heartbeat. Yet, she was sure she had heard something, a slight knocking sound when there should be nothing. No one else had any reason to be up here. The only room in this turret was Miss Abigail’s, and the only person in that room was Becky.
And she wasn’t staying any longer than she had to.
Miss Abigail's Room is available from:
Amazon
Barnes and Noble