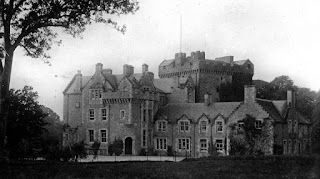 Sir Cuthbert Murray built it as a border outpost and its walls – an impressive thirteen feet thick – were certainly designed to keep out unwanted visitors.

But what about the ghosts? The tragic spirit of Marian Carruthers is said to haunt the castle. She originated from nearby Borthwick Castle but, in 1564, her father arranged a marriage for her. Rather than face a loveless union, she ran away and sought refuge under Sir Charles Murray’s protection at Comlongon. He took her in and, in gratitude she awarded him half her estate. Her father wasn’t to be deterred though and, some versions of the story state that he pursued a legal case to force her into the marriage against her will. She fell from the highest window in the castle’s tower – whether by accident or design is not known for sure although there is a theory that Sir Charles was greedy enough to want his share of her estate sooner rather than later and pushed her to her death. Others say that she threw herself off the tower rather than acquiesce to her father’s demands. 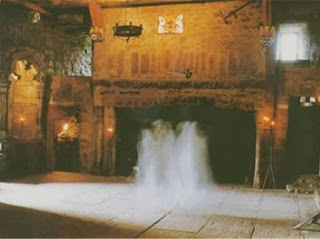 Whatever the truth of it, her father refused to pay for a proper burial and she was interred in an unmarked grave in the woods nearby – in unconsecrated ground.

On the spot where her body landed, nothing will grow and her ghost walks in the garden on the anniversary of her death – September 25th – every year. She has also been seen in various locations in the castle itself.

She also appears nearby at an inn and the owners have encountered her on a number of occasions.

But she isn’t the only ghost. A small child has been reported in various locations and indeed part of the castle was used during the war to house evacuated pre-school age children. Could it be one of them? The sound of childish laughter has been heard when there are no children present or staying at the castle. 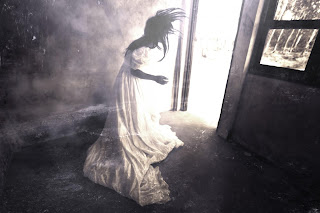 Guests staying in the beautiful 4-poster rooms reported banging noises during the night, the sound of furniture being dragged across the floor and various other phenomena they could not explain. In the room said to have been used by Marian Carruthers, a honeymoon couple were awakened by noises including what sounded like a heavy bottle (champagne?) being banged against a solid object – maybe furniture or the floor.

There have also been a number of manifestations in the Great Hall, including actual physical sightings, and smells ranging from cigarette smoke to apples.

Whether for a creepy night of supernatural mayhem, a visit to a place of particular historical interest or a special celebration, it seems Comlongon Castle delivered on all fronts. Until April of this year, the privately owned castle was run as a hotel and top wedding venue, but, sadly, it has now ceased trading. The ongoing costs of renovation and upkeep of such a magnificent building proved too much.

Let’s hope poor Marian finds rest though. She has been wandering there for far too long…

Posted by Catherine Cavendish at 12:27