The Reckoning - A Tale with A Twist

This short story won me a prize in a competition a year or two ago. Sit back, relax and read all about... 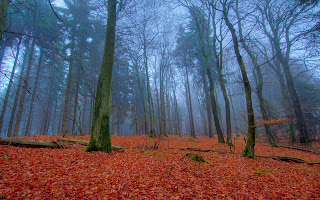 Karen jumped at the sound of the familiar voice behind her. All she could see were the branches of the sycamore trees bending in the stiff breeze, scattering the first leaves of autumn. She could hear their papery frailness as they fluttered down around her.

‘I knew you’d come back.’  Who had said that? What did they mean? She had never been along this road before. She couldn’t have been. This was Herefordshire and she’d never been here in her life. In fact, Karen had never been south or west of Birmingham before. She wouldn’t even be here today if it weren’t for her sister. Come to think of it, that voice she had just heard sounded a little like Steph’s, but that was ridiculous. Karen had driven down alone and Steph would be waiting in the little cottage near Ross which she had rented for them for the week. No, she must have imagined it. Probably the breeze playing tricks with her hearing. But just in case…

Karen reached in her bag and rummaged around until she found her phone.
She dialled her sister’s number.

‘I’m here’, her sister said, ‘at the cottage waiting for you. How long do you think you’ll be? I’ve got the Chardonnay nicely chilled.’

Karen breathed a sigh of relief. ‘I just stopped to stretch my legs for a bit. I think I’m about half an hour away but I couldn’t stand the motorway any longer, so I’ve taken a different route. There are some really pretty villages we could explore if the weather holds.’

‘I’ll look forward to it,’ Steph said, ‘and there’s a quaint little pub just a short walk from here. They serve food too, so I thought we might have a meal there later if you fancy it.’

‘Sounds good to me.’ Karen ended the call and wandered back to the car.

Then sheheard it. She stopped dead in her tracks.

‘We were here five years ago. Don’t you remember, Karen?’

She whipped around. No-one there. Panic seized her and she ran the last few metres to where her car was parked in the lay-by. She fired up the engine, revving hard before swerving into the road, to the blare of horns and the screech of brakes. She was oblivious to them, only aware of the voice that had spoken to her.

She was so sure someone had stood at her shoulder - their hot breath on her neck. Her heart pounded. She caught sight of her blanched face in the rear view mirror. Beads of sweat broke out on her forehead. She could barely breathe

She must calm down. It had been a long drive down from Carlisle, after a busy week. Four hundred new students at the college and she’d registered every single one. No wonder she felt shattered. Not surprising that her mind was playing tricks on her.

Karen reached forward and switched on the radio. Goldfrapp’s latest was playing. She gave herself up to the music and relaxed a little. She glanced at her hands, still white-knuckled as they gripped the steering wheel. Alison Goldfrapp's breathy voice wafted over her and worked its calming magic.
.***
‘So what do you think?’ Steph asked when she arrived.

‘I think it will do us very nicely for a relaxing week of no work and lots of chilling out. Speaking of which…’ Steph disappeared into the kitchen, and returned ith two glasses of chilled white wine.

‘Cheers!’ she said and they clinked glasses. ‘I thought, after you’ve unpacked, we would go down to that pub I mentioned. I don’t know about you but I’m starving.’ 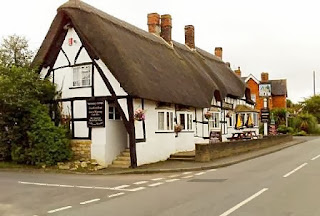 The thatched inn was quiet, with just a handful of locals around the bar and some couples seated at tables by the windows.

‘Two white wines please.’ Karen saw the barman give her a slightly odd look. He seemed about to say something but decided against it and took two glasses off the shelf.

‘I’ll get these. You go and sit down.’ Karen got her purse out ready to pay. Steph nodded and selected a vacant table by the front window.

Presently Karen brought their drinks over. ‘He’s a strange one,’ she said, indicating the barman. ‘Never spoke a word to me, just handed me the wine, took my money and gave me the change. And he kept looking at me in this really weird way.’

‘Don’t look now, but I think he’s talking about us to his mate,’ Steph said.

As soon as she dared, Karen glanced over her shoulder and saw the barman and an older man immediately turn away.

‘Inbreeding, I reckon,’ Karen said, under her breath. Steph giggled. ‘Now,let’s have a look at these menus. What shall we eat?’

Two hours later, feeling the benefit of cottage pie, followed by lemon meringue, Steph and Karen put their feet up in the living room of the cottage.

Karen stretched. ‘That was an interesting evening to say the least. They’re a strange lot around here. Did you see the way they kept staring at us? I mean, not just the barman, but some of the others as well. It was a bit unnerving at times.’

Steph poured out more wine. ‘I don’t think they get all that many strangers here. It’s a bit off the beaten track after all.’

‘Well that’s what we wanted. Peace and quiet away from the bustle, but why did you choose here, Steph? I mean neither of us has been here before—’ The memory of the voice stopped her.

‘What’s the matter Karen? You look as if you’ve seen a ghost.’

Karen told her about the voice and what it had said. ‘But I know I’ve never been there, or here, before today.’

Steph sighed. ‘About five years ago.’

‘Five years? But that’s when the voice said I'd been here.’

Steph burst into tears, great heaving sobs that seemed to be torn from her body.

Steph raised tear-filled eyes. ‘Not this, Karen. Not now. I can’t now, but tomorrow. I promise. Tomorrow I’ll tell you everything.’

But in the morning, Steph wasn’t there and her bed hadn’t been slept in.

Karen raced from her sister’s room, down the stairs and out into the garden.

She saw Steph standing under a pear tree, tears streaming down her face.

‘Come on, come inside. It’s going to rain any minute.’

‘No, Karen, please don’t ask any questions. You’ll find out everything when we get there.’

They drove in silence to the police station in Ross and Karen didn’t even notice the bemused look on the desk sergeant’s face. In just a few minutes, they were in an interview room, opposite two detectives. Karen listened in horror as Steph spoke calmly and quietly.

‘I want to confess to the murder of Andrew Steele five years ago.’

‘But he was my boyfriend too. I couldn’t share him anymore and he said he would never leave you for me.’

Karen fell silent. In that moment, she felt as if she had never truly known her sister. Here she was, calmly confessing to the murder of the only man Karen had ever loved. But there was more. Much more.

‘I buried him in some woods about half an hour’s drive from here. I could take you there. I remember there were sycamore trees and I parked in a lay-by. It was the middle of the night so no-one saw me.’

Karen saw the frowns on the detectives’ faces.

Steph finished her confession and the two men exchanged glances before turning back to the distraught woman in front of them.

‘We need the psychiatrist here,’ one of them said and the other one left immediately.

‘Now,’ said the detective as he took a deep breath, ‘who am I speaking to? Karen or Stephanie?’

Posted by Catherine Cavendish at 12:10