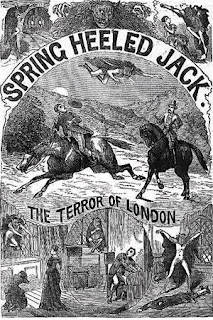 Here is a legend first begun in early Victorian England. A man with the apparent ability to leap over walls and capable of turning up anywhere from the Black Country (in the Birmingham, West Midlands area) to Liverpool, Chichester and London - even a foray to Scotland. Sightings of this fantastical and scary creature grew to a peek in the 1880s – especially in the West Midlands.

So what did he look like? Descriptions vary with the witness, but some characteristics occur more frequently than others. He was alleged to possess a goatee beard and devil’s horns, pointed ears and flashing eyes of fire. The popular Penny Dreadfuls of the day depicted him looking like a swarthy devil. Another feature common to all sightings was his ability to leap high over hedges, walls, rooftops with complete ease. He terrified his victims by suddenly leaping in front of them, or up behind them. 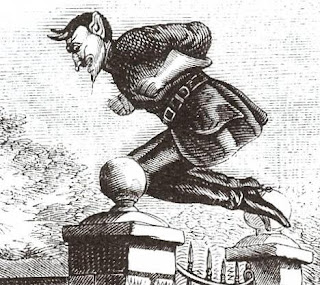 In 1855, one report saw him in Old Hill in the West Midlands, where he leaped from the roof of the Cross Inn public house over to the roof of the butcher’s shop across the road. This occurrence was swiftly followed by reports of other sightings in the area and a wave of panic from the local populace.

A period of quiet was followed in 1877 was followed by a whole spate of sightings in Blackheath, Dudley and the Acocks Green area of Birmingham in 1877. Spring-Heeled Jack continued to be active through the 1880s. The Birmingham Post in 1886 reported that: “First a young girl, then a man, felt a hand on their shoulder, and turned to see the infernal one with glowing face, bidding them a good evening.” 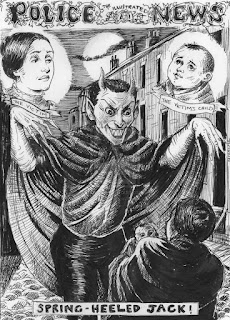 He usually appeared at night and targeted mainly young women. Originally his intention appears to have been to scare rather than cause actual harm to his victims. But before too long, he tired of this tame pursuit and his modus operandi turned from scary to full blown assault. On one occasion, he was said to have been accompanied by companions, all dressed in armour, who attacked a carpenter, ripping his clothes to shred. There was a suggestion in the press that the assailants were a group of, essentially bored, young gentlemen out to get their kicks by frightening people so much they lost their wits. Most of the people prepared to talk to the newspapers about Jack presented mere hearsay. It hadn’t happened to them, but to a friend of a friend. 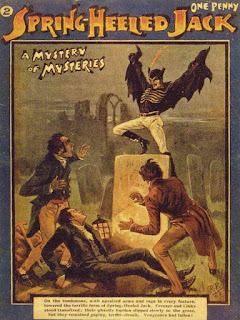 The first credible account came from 18 year old Jane Alsop who, in February of 1838, reported to magistrates that she had been approached by a man dressed in a cloak, near the gate of her home in Bearbinder Lane, near Bow, London. He had asked her to bring a candle as the police had caught Spring-Heeled Jack nearby. She duly did so. He took the candle from her, opened his cloak and she caught sight of his “hideous and frightful appearance”. He then vomited a blue and white flame and his eyes became like “balls of fire”. He wore a helmet and tight fitting clothes and he began to set about her with metal claws, ripping her dress and tugging out her hair. She managed to escape his clutches when her older sister, hearing her cries, opened the door and dragged her inside before shutting the beast firmly out.

In Limehouse, London, a girl called Lucy Scales, along with a female friend, was accosted by a gaunt man, of seemingly gentlemanly appearance. She was so scared she collapsed in a fit. In this instance, two men were actually brought to court charged with her assault but were released owing to lack of evidence. 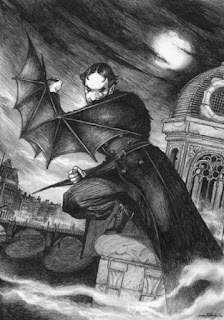 Outside London, Spring-Heeled Jack seems to have toned down his fire-vomiting behaviour in favour of his more athletic accomplishments and, for the rest of the century, it is for this incredible ability to leap to great heights that his fame persisted and spread.

In 1904, in Liverpool during one of his last appearances, he was reported as leaping over rooftops and bounding down the street. He was even reported as being seen on the rooftop of St Francis Xavier’s Church in Salisbury Street in the Everton district of the city.

By the end of the nineteenth century, his notoriety was such that almost any strange encounter with a swift-footed criminal could result in Spring-Heeled Jack’s name being associated with it. In Edwardian times, his name was quoted to children by parents, to ensure they came home before dark. A convenient and effective bogeyman. 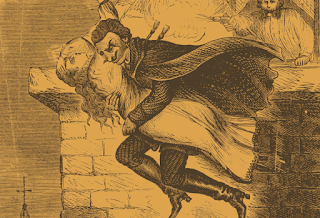 There were rumours that he was a real person – Henry de la Poer Beresford, the Marquess of Waterford no less, who was certainly in London at the time of the 1830s sightings and was known to be something of a rake at the time, being hauled up before magistrates for drunken, brutish and outlandish behaviour on more than one occasion. However that wouldn’t account for all the other sightings, or the fact that the legend persisted into the twentieth century, with no apparent diminishing of athletic prowess that would be caused by the natural ageing process. No one was ever convicted of the assaults he is alleged to have committed and some sources at least believe he was capable of the earlier attacks but, following his marriage in 1842, he appears to have led a blameless life. Maybe he had imitators. 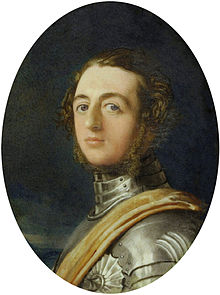 These days, Spring-Heeled Jack is once again providing entertainment for the masses, through steampunk literature and appearance in popular TV shows, such as Dr. Who. No doubt, as with most urban myths, there is a grain of truth there somewhere, but rumour, numerous retellings and embellishments have gifted us a larger than life character that merely adds to our cornucopia of rich folklore traditions.
Of course… if you are out one dark night and see a strange man leaping over the rooftops,  you may yet prove me wrong…

(If you want to know more about Spring-heeled Jack, try this book by Dr Karl Bell The Legend of Spring-Heeled Jack) 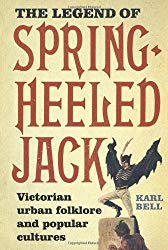 Posted by Catherine Cavendish at 15:38