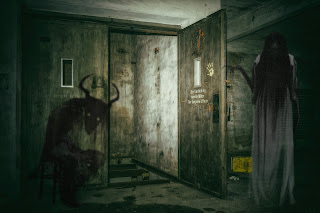 If you needed to enter an asylum (or mental health facility), surely it would be because you had a mental health problem of some kind, right? Wrong. In the past, all you had to be was poor. Desperately poor, or old, disabled, or suffering from alcoholism. People afflicted with dementia, or with physical infirmities could find themselves behind the walls of places such as Rolling Hills Asylum in Bethany, New York. If they were indeed mentally ill, they could look forward to the very latest treatments, which read like a catalogue of methods of torture that might have been favoured by the Spanish Inquisition. Over the years these included – but were not restricted to – lobotomies, and electric shock therapy (without anaesthesia). 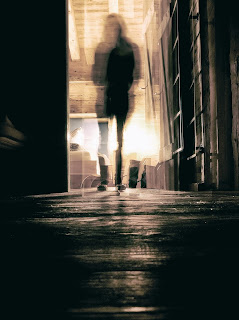 Rolling Hills Asylum can date its history back to 1827 when it opened as the Gennessee County Poor House. A newspaper report from the time stated that it was open to: ‘“habitual drunkards, lunatics (one who by disease, grief, or accident lost the use of reason, or from old age, sickness, or weakness was so weak of mind as to be incapable of governing or managing their affairs), paupers (a person with no means of income), state paupers (one who is blind, lame, old, or disabled with no income source) or a vagrant.’

All inhabitants were referred to as ‘inmates’, implying that whatever their reason for being there, they were all the same and all, essentially, prisoners.

Rolling Hills has operated variously as poor house, orphanage, asylum, and tuberculosis hospital. Around 1700 bodies are believed to be buried in the grounds – all in unmarked graves. Its last function was as a nursing home, but it only lasted for ten years in that guise mostly because of official code violations. It was then closed permanently. Most of the dorms and old buildings were torn down at that point.

Now, it looks like Hollywood’s ideal of a haunted asylum and hospital. The four storey brick building needs little imagination to ‘see’ ghosts walking there. Its echoing walls and corridors wreak of stories of inhumane treatment, despair and pain. Set foot in this place and you know you are not alone. Walk – and the unquiet spirits walk with you 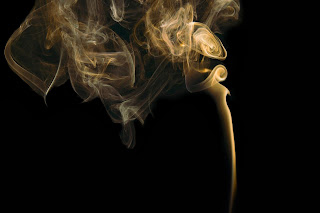 And there have been plenty of reported incidents. Shadows, footsteps, ghostly touching, disembodied voices. It’s a ghosthunter’s delight. Not that all the ghosts are hostile.

Night-time ghost events are run at the facility. One of the most frequently seen ghosts is believed to have been Roy Crouse, who died in 1942. He spent most of his life here, was around seven feet tall (it is believed as a result of gigantism) and his afterlife is spent wandering as a very tall shadow who follows visitors, weeping. He may have been captured on camera, as one female visitor on a tour said she heard footsteps coming up behind her. Flashlights revealed no one there but then she turned around and took a photo. Sure enough, if you look closely, there is a tall shadow.

On the first floor of the main building, is Hattie’s Room where an old woman has been recorded saying, “Hello”. Roy’s room is also in this vicinity and he seems to have a soft spot for ladies in distress. The current owner, Sharon Coyle, was terrified by a rat in the infirmary about two months after moving in. She ran from there, screaming, and the next day found the rat dead on the stairs with blood oozing from its mouth as if its neck had been broken. On the wall above it, the clear mark of a large, bloody handprint led her to believe Roy had done this for her. These days, Roy is a much-loved figure of Rolling Hills. What would have been his 130th birthday was celebrated in true style in April 2020. 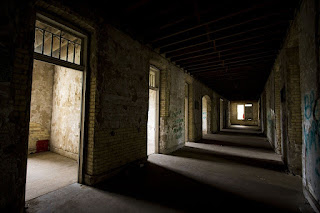 On the second floor of the East Wing, shadow people move silently about in shades varying from pale grey to pitch black. The shadows creep along the floor or walk as humans. They can be amorphous shapes or human-like. Sometimes they appear as an appendage – an arm or a single leg.

In the basement, the Pysch Ward and Solitary Confinement cells show evidence of shackles having been used to restrain those deemed to be unruly. The Morgue, as might be expected, is a particularly uncomfortable place to visit. An embalming table stands near two large walk-n refrigerators for the storage of corpses. Visitors have heard ghostly voices and seen things moved about by unseen forces. People have also been shoved and even knocked off their feet here.

Outside, the exact location of the cemetery is unknown. Nature has taken over and any gravestones have crumbled or become so heavily overgrown as to be indistinguishable. No site map exists or even a burial record.

For some, Rolling Hills will have been the only home they ever knew.

Sharon Coyle has developed a thriving business onsite – with ghost evenings, tours, shopping, dining and much more. Rolling Hills is frequently used for filming and has been featured on a number of television ghost hunting shows. 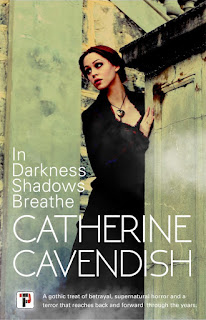 Carol and Nessa are strangers but not for much longer.

Posted by Catherine Cavendish at 05:00