Absinthe, Murder, Green Fairies and Me 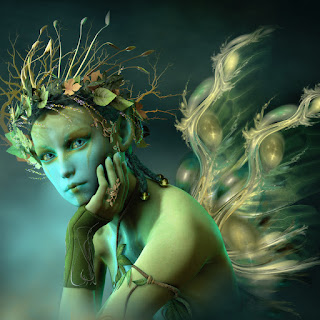 The mere sound of the word, like a breath stroking your lips, conjures up images of decadence, revelry, hallucinations, insanity, and a mystical, mythical quality that no other drink, alcoholic or otherwise, can come near.

It is associated with murder, suicide, madness, the Moulin Rouge, Ernest Hemingway. Oscar Wilde, Picasso, and the Parisian world made famous on posters by Toulouse Lautrec. Even the way it is served - or should be served - is unique. You don't merely slop a healthy (or should that be unhealthy?) measure into any old glass add ice and water, raise it to your lips and slurp it down. No, that may suffice for its sister-born-on-the-wrong-side-of-the-blanket-drink Pernod but to savour absinthe, you must have the right equipment and engage in the proper ceremony. 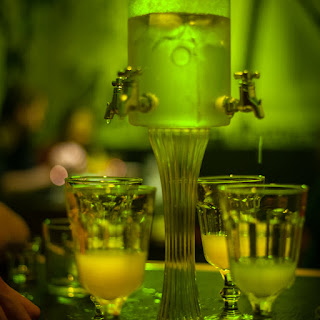 You need a water fountain, the correct glasses, proper spoons, lump sugar of the highest quality. You need to watch as the iced water pours over the sugar balanced on the slotted spoon that nestles comfortably across the top of the glass. Regulate the flow of water to ensure the cube is thoroughly dissolved before you turn it off, remove your drink and taste it. Before you do, let all your senses indulge in the magical transformation that has taken the clear green liquid and transformed it, as if by magic, into a cloudy, aromatic ambrosia. Inhale the wondrous blend of aniseed and herbs. Close your eyes and allow yourself to concentrate fully as you take your first sip. Let the liquid flow over your tongue, caressing your taste buds before swallowing. Don't rush. The Absinthe Fairy doesn't like to be rushed. Besides, that way leads to madness... 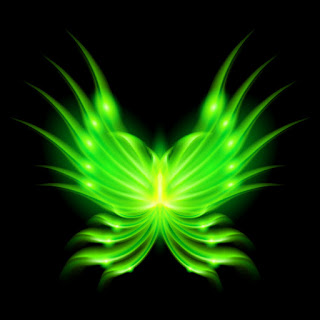 OK, we've avoided the controversy long enough. Absinthe was banned in many places throughout the world as it became linked to acts of sheer lunacy. One such urban myth had it that Van Gogh sliced off his ear following a marathon absinthe session. Not true though apparently. Yes, he lost his ear, but absinthe was not the cause.

The drink was first distilled in Switzerland as a medicinal herbal tonic in the 1700s and, by the mid 19th century had become hugely popular as a potent and much cheaper alternative to wine. Needless to say, the French wine industry wasn't altogether happy about droves of people deserting their national drink in favour of this young upstart and began to create a cult of 'anti-absinthism'. They spread rumours of an association with anything from epilepsy to murder and madness.

This increasingly widespread belief of the negative properties of the drink was fostered by a certain Dr. Valentin Magnan who exposed laboratory animals to pure wormwood essence which does indeed cause madness when delivered in the kind of quantities he was experimenting with. But in absinthe, the quantity of wormwood was, and is, tiny. Not enough to cause any sort of damage when drunk by a human, even an over-indulgent one. Sadly, though, the reputation of the drink was wrecked. 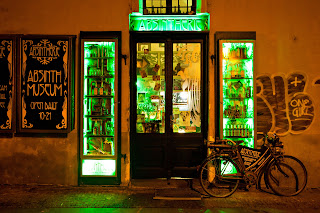 Then, in August 1905, a widely publicised murder case stuck one of the final nails into the Green Fairy's coffin where they remained for most of the 20th century.  It involved a Swiss man called Jean Lanfray who, following two glasses of absinthe, took his rifle and shot his pregnant wife, killing her. His four-year-old daughter, Rose, witnessed what had happened so he shot her too, swiftly followed by his two-year-old daughter, Blanche, who was asleep in her cot.

What wasn't taken into account was that Lanfray was a known alcoholic who had also consumed creme de menthe, cognac, and seven glasses of wine at lunchtime, a litre of wine after dinner and a couple of coffees laced with brandy.

All this added fuel to a growing movement that saw a widespread ban on absinthe in countries such as Belgium, France, the US, Switzerland, and Brazil between 1906 and 1914. In many cases, those bans stayed in place until well into the 21st century. The US only lifted its ban in 2007.

These days, and with subtle changes to the formula, absinthe is once again enjoying something of a resurgence. Absinthe fountains are once again being dusted off and placed lovingly on bars although there is a long way to go before we see the Green Fairy waving her magic wand down at every local pub, or even at your local supermarket or liquor store. 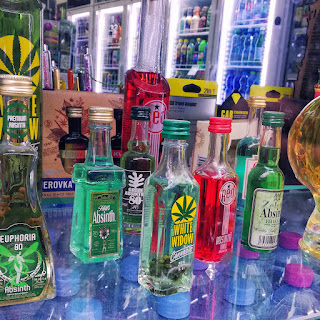 Now, before you go off and buy your own bottle, remember what I said about needing the right equipment and also, a word or more of caution. While it is indeed true that the minuscule quantities of wormwood (and more specifically, its constituent, thujone) won't kill you, alcohol poisoning most certainly will, and absinthe should be treated with respect, It is a highly potent spirit, typically between 55-75% ABV which is equal to 110-144 proof. To give you a comparison, a typical whisky is around 80 proof. This Green Fairy has teeth. Don't drink it neat. It needs dilution with water (known as creating an absinthe louche). And please, don't drink in quantity. With absinthe, less is most assuredly more.

You really don't want those lovely Green Fairies to turn into demons now, do you?

So, with apologies to anyone who prefers their absinthe served in another fashion, here is my husband, Colin, who got a chance to play with his Christmas presents on film... (oh, and, he meant to say '68% ABV'!)

The title of this blog is 'Absinthe, Murder, Green Fairies and Me.' Well, we've enjoyed our absinthe, read about a murder, said hello to the green fairy... And me?

Well, absinthe features in a short story of mine. Maybe it will grow into a novel one day, who knows? The green fairy isn't particularly sweet, but the setting will be suitably evocative of a time when absinthe water fountains resided on every bar, writers and artists sat around imbibing, creating their own magic, while amongst them sat someone who shouldn't have been there. Someone who did not belong in their company, or even in their time and place. Someone who... Ah, but that's for another time, isn't it? 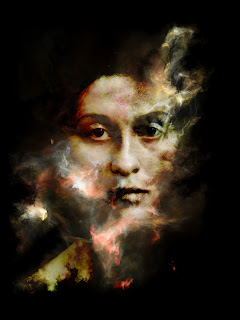 Until then, à votre santé.

To find out more about the fascinating history and culture of absinthe, Colin recommends: The Daedulus Book of Absinthe by Phil Baker 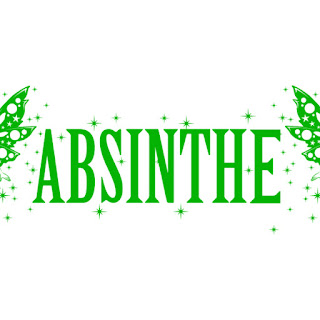