The Woman Who Inspired Me To Write

When I was a little girl and, okay, I'll say it first, that was a long time ago, one of my enduring memories is of my mother sitting at the dining room table, her pencil sharpened and busy as she transcribed memories of her childhood onto sheets of lined foolscap paper.

These were her happy years, spent simply, living in a small rural village called Elford, in Staffordshire. Tamworth was the nearest town and Lichfield the nearest city. Birmingham, lying some twenty miles away, was rarely visited for pleasure. Besides, why would you want to go there when you had everything you needed in the village? Well, until you reached your teens of course, and became hungry for the bright lights and faster pace of life.

While Mum wrote, I would play with my dolls or my cat, Penny. I would make up stories, read, let my imagination run free...

And day after day, Mum would write. She took a creative writing course and dabbled in short stories. They were fiction but always, somewhere, there lurked a grain of truth. Invariably set in the 1920s or 1930s - she was born in 1920 - there would be a character I would later come to identify in her memoirs. Sometimes she would write about a scandal that I would later discover had actually taken place - although the names and some identifying details had all been changed.

I can't remember exactly when she stopped writing. But for years, maybe a decade or more, the pencils and foolscap were put aside only for her to return one day and pick up where she left off. This became a pattern. Days and weeks of daily writing followed by months and years of none.

Meanwhile, I had caught the writing bug. Watching her may have been the catalyst, or perhaps it was simply because she enjoyed it. Whatever the start of it, I was the geeky kid at school who relished writing essays while my schoolfriends groaned at the prospect. Some of those essays grew into short stories, one eventually morphed into a novel. Mum encouraged me while my father considered my desire - at around eight or nine years old - to purchase a portable typewriter as a complete waste of time and money. I bought my typewriter, selling a number of toys in order to do so.

Fast forward to 2018. To March of that year to be precise. At the age of 97, my lovely and inspirational Mum passed away peacefully in hospital. I was by her side and she simply slipped away as she always wanted. At her funeral, we celebrated her long life. She wanted no tears.

I found those sheets of foolscap. She had added to them over the years and, reading them through, I knew I had to get them published, The result is An Elford Childhood by Doris Buttery. It is subtitled, Growing up in a Staffordshire Village 1920-1933.

Minimal editing was required - to eliminate repetition, group certain events and locations together and a bit of tidying up. Apart from that, these are her words as she wrote them and show what a great storyteller she was - with a fine memory. As with her fiction, she had changed many names (almost all in fact) and, while she had created a sheet showing some of the main name changes for identification purposes, she had not extended this to all of them. Luckily, Elford resident and historian Greg Watkins was on hand to help decipher the mystery. Mum was a lifelong lover of crime novels and would have been highly amused at the detective work he and I undertook. I am indebted to him for all the fact-checking and general rooting and digging in archives, the 1921 census and Elford Parish records. I am also indebted to Umbria Press for doing such a fine job - especially with some ancient, faded photographs into which they breathed fresh life.

Most of all though, I am indebted to the author herself. Doris Buttery undoubtedly passed on a lot of gifts to me; her love of writing, reading, and cats being at the forefront. She also enjoyed a ghost story as well as her beloved crime fiction. So do I. Would I have got into writing if I hadn't inherited the love of it from her? We'll never know, but I somehow doubt it.

Doris's story, An Elford Childhood, is published by Umbria Press, available in paperback online and from retail bookshops either on the shelf or to order. 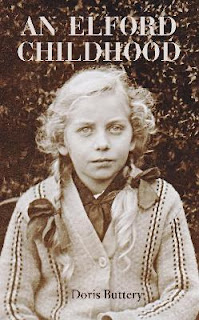 When Doris Buttery was born in the small village of Elford, King George V was on the throne. The First World War had ended less than two years earlier, and women had yet to achieve the vote on equal terms with men.

Growing up with her parents and two older brothers, worldly possessions were few and money was tight for most people in the village, but life was far from dull. With an array of colourful characters, scandals, long-held secrets and the changing seasons, there was plenty to keep an active, inquisitive young girl entertained.

Decades later, Doris picked up her pencil, grabbed some sheets of lined foolscap and began to write down her memories. Then she put them away. Only her daughter knew they existed.

After Doris’s death in 2018, her daughter found the neat folder, opened it and began to read. The years rolled back and the world of a rural community in the 1920s and early ‘30s emerged, fresh from those carefully written pages. It was a world far distant from our own and now it is here, as that young girl remembered it.

An Elford Childhood provides a tantalizing trip back in time to a life lived in a place where the milk came in churns, water had to be pumped and collected, few cars troubled the narrow lanes, and electricity had still to be installed in the house where Doris lived.

and other High Street bookstores