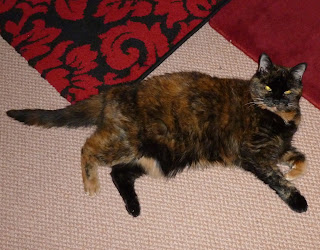 After a mercifully short illness, we lost our beloved Mimi yesterday, just over two months short of her 19th birthday. On her 18th birthday, last August, I ran this blog in her honour. I make no apologies for running it again - this time in loving memory of an incomparable and remarkable cat who made my world a kinder, gentler place for nearly nineteen years:

On the Occasion of Her 18th Birthday, Mimi wishes it to be known that this is Her Blog Post

As a feline, all I have to say is "About time too ". I've waited long enough. The Great Cat Goddess (Bastet, for the uninitiated) knows I've waited long enough. I have sat, for hours, at my human's side, patiently awaiting my turn. I have made suggestions - elegantly presented with a delicate vibrato - all of which have been ignored. I have tried to help by taking over the keyboard, only to be plonked on the floor with vague promises of food which took hours to materialise. I'm sorry, but half-hearted strokes, being smothered with (guilty) kisses and empty platitudes about how "gorgeous and irresistible" I am, just doesn't cut it. I know I'm irresistible. I'm a cat. It goes with the territory. 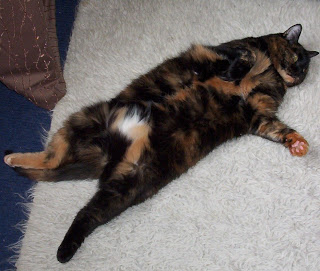 Anyway, finally commonsense has prevailed. Even if it has taken 18 years. And I am here to tell my story. Well, some of it anyway. Oh, all right then, just the first few days.

On 29th August 1995, in a barn belonging to a smallholding, where the owners bred pedigree Vietnamese potbellied pigs, tables and chairs were being laid out, ready for a wine tasting by the local amateur winemakers' association. My mother, Woody (short for Woodbine - one of the flower fairies), was feeling restless and had a pain in her tummy. Of course, she quickly realised this was my brothers, sisters and I telling her we were ready to come out and greet the world. To tell the truth, it was getting a bit cramped in there. Well, there were six of us. 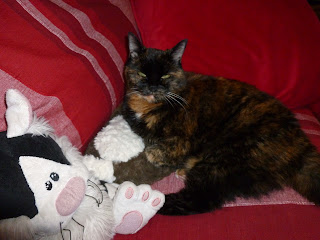 Being a resourceful sort of cat, she picked a nice spot, partially concealed by a table cloth, and the first of us soon popped out - I forget who, but probably my sister, Lucy. She was always precocious. Naturally, when the humans realised what was happening, they became a little alarmed. Silly really, Mummy knew exactly what she was doing. Eventually, the humans took their cue from her, stepped over her and let her get her on with birthing her kittens. I was the last. It was all nice and comfy inside, and now the others had left, I had plenty of room to stretch out. But I could sense my mother calling me to come out so, reluctantly, I left my nice warm Mummy's tummy and ventured forth to join my siblings.

It was a mad scramble to latch onto a milk supply, and the others were a bit bigger than me, so they kept pushing me out of the way, But I showed the sort of spirit, tenacity and determination that have stood me in good stead ever since. I held my breath and dived in, wriggling my bottom to manoeuvre into position. I found my milk button and was soon suckling along with the rest of them. 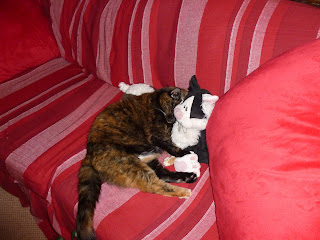 My early days were spent in silent darkness until, one morning, my ears unfurled and all these strange noises bombarded me. It was a little scary at first, but I soon adjusted and. when my eyes opened, the world was revealed to me - along with a couple of dogs.

Woody was a wonderful mother; she taught me all I know. I learned that the strange two legged creatures were there to serve us and I must feel sorry for them because they couldn't grow fur, didn't know how to pounce on their prey and couldn't reach to wash their bottoms. Poor things!

I was the only Tortoiseshell in the litter. I had two ginger brothers, 2 tabby sisters and a black and white, whose gender we were unsure of. Mummy told us our father was either an itinerant ginger tom who came to visit now and again and usually left his mark, or a tabby boy, who was more of the shy, retiring sort. She said she wasn't sure but, looking at me, it could have been both. Now, that's because I have an unusual characteristic. I have alternate paws. If you look at the top picture, you'll see I have two black paws and two champagne coloured (no, they're not beige!). I have correspondingly, two pink pads and two black pads. Naturally this makes me look even more strikingly beautiful than I otherwise would be. 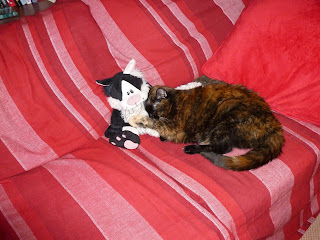 My human adopted me (along with my tabby sister, Lucy) and we left our Mummy when we were seven weeks old. Lucy was a bossy girl. I used to get really fed up with her boxing my ears, and she led me into mischief. I wouldn't mind, but it was her idea to steal the Shropshire Blue cheese. It's not my fault I couldn't resist one last bite when we got caught. Naturally Miss Goody Two Shoes Butter Wouldn't Melt Lucy was off the counter and on the floor, protesting her innocence, when the human came into the kitchen.

Still, it was sad when Lucy died, because she was so young - only two - but I was determined no other cat was sharing my human and I have stuck to that ever since. I'm the only cat in this household and that's the way it's going to stay!

Well, I hope you've enjoyed your visit. I shall be celebrating my birthday quietly, at home, but, for now, please excuse me. I've only had ten hours sleep today and I'm ready for my preprandial nap.Now, where's that stuffed spaniel. Ah, there he is... 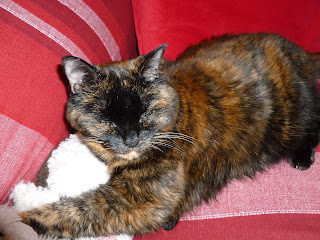 Posted by Catherine Cavendish at 11:58